Juvenile Laryngeal Paralysis & Polyneuropathy, or JLPP, is a devastating and deteriorating disease that effects the puppy neurologically.
Per the OFA website:
“Juvenile laryngeal paralysis and polyneuropathy (JLPP) is an autosomal recessive, hereditary disease that affects Black Russian Terriers beginning typically around 3 months of age. Affected dogs have difficulty breathing when excited or exercised and may have a change in their bark. As the disease progresses, they develop weakness and loss of coordination in the hind limbs which will eventually progress to affect the front limbs as well. They may also have difficulties swallowing which can result in choking or pneumonia.”

As difficult as this video is to watch, this is only the beginning.  JLPP is progressive- meaning it is only downhill from here.  This poor pup will eventually be unable to walk at all, unable to swallow and will die.  This description of JLPP does not even come close to properly indicating how catastrophic this disease is in the Rottweiler.  For awhile, this disease was not known in the Rottweiler.  **NOTE**  This does not mean that this breed was not affected by this disease until recently.  Young puppy deaths were chalked up to aspirate pneumonia, injury, etc.  As too many breeders do not disclose when things go wrong, vital discussions that could have potentially helped us identify this disease even sooner were not happening.   I first heard of JLPP at a seminar in Holland.  I had attended specifically because one of the lecturers was a reproductive specialist that I highly respect, but I am so grateful this seminar gave me the opportunity to learn about this devastating disease years before it became common knowledge in the United States.  This also afforded me the opportunity to educate many veterinarians here in the states regarding JLPP as well as start getting the word out to other breeders, handler, trainers and owners.  I have tried to set up this webpage in an attempt to not only continue educating, but also try to help everyone have a better understanding of this disease.  I truly cannot emphasize enough how imperative genetic testing is.  It is only $65 and a simple cheek swab to test your Rottweiler for JLPP.  NO ROTTWEILER SHOULD EVER BE BRED WITHOUT FIRST TESTING FOR JLPP.  THIS DISEASE IS 100% FATAL, YET 100% PREVENTABLE.  JLPP does not just kill young pups, it robs them of dignity and quality of life as it ravishes their mind and body, deteriorating daily.  Many of the genetic test we do- hip and elbow x-rays, heart echo cardiogram, patella luxation, etc.- help us to strengthen our breeding stock.  They help us to have stronger, healthier lines, but they cannot completely eliminate the disease they test for- mostly because of the profound impact environment, nutrition, exercise, etc. has on the developing puppy/dog.  But to have a test that is 100% effective in COMPLETELY ELIMINATING a disease- we could, if we banned together, completely and entirely eliminate this disease from ever affecting another single Rottweiler!!  If you are looking to purchase a puppy, PLEASE, PLEASE, PLEASE- DO NOT PURCHASE A PUPPY FROM A BREEDER THAT DOES NOT SCREEN FOR JLPP!!  Carriers for JLPP are completely unaffected.  This means, YOU CANNOT TELL IF THE PARENTS ARE CARRIERS SIMPLY BY LOOKING AT THEM!  “JLPP Free by parentage” IS NOT THE SAME THING AS GENETIC TESTING OF THAT DOG!!  The test is ONLY $65 and so, so simple to do.  THERE TRULY IS NO EXCUSE, EVER, TO NOT TEST.  Forgive the caps lock, but I have seen this disease up close and personal and it is heart wrenching.  And to know that this disease that is always fatal is also completely preventable if only the human would care enough to test, well, it fills me with immense sorrow, anger and frustration.

The disease:
A bit about how the body works.  The brain controls muscles via signals that travel through nerves.  When the nerves are not able to convey the messages properly, the muscles become weak or cease functioning.
Let’s dissect the name.
Juvenile– pretty self explanatory.  It effects young pups- usually at around 12 weeks of age.  The initial onset of symptoms often present mildly and may be ‘explained away.’  When the puppy starts stumbling or is clumsy, it can be surmised that it is just puppy awkwardness.  When the pup chokes or aspirates, maybe it did not chew well enough or ate too fast.
Polyneuropathy.  If you beak the word down, poly means “many”, neuro means “nerves” and “pathy” means disease.  The disease affects the nerves and is degenerative- meaning it degrades or worsens with time.  The longest nerves are usually affected first, which is where the Laryngeal Paralysis part in the name comes from.  One of the longest nerves in the body supplies the muscles that control the voice box, or larynx.  The larynx contains two vocal folds (also called vocal cords).  To breathe, muscles (controlled by nerves) in the larynx pull the vocal cords apart and allow allow the air from the upper airway down into the trachea and lungs.  To produce a bark (or for humans, talk or sing), those same muscles in the larynx pull the vocal cords together so that the airstream passes between, vibrate the vocal cords and produce sound. The same nerves also help close the larynx when a dog swallows to prevent them from choking on their food.Some of the early symptoms are breathing difficulties- especially after exercise, a change in bark, and overall, lack of coordination.  So, as the polyneuropathy sets in, the larynx no longer closes properly, causing choking, vomiting, and aspirating (breathing the food into the lungs).  This can result in pneumonia.  The next longest nerves supply the hind quarters of the puppy.  The nerves control the muscles, so the puppy starts by having trouble getting up or being wobbly on his/her feet.  Eye abnormalities have also been noted to include cataracts and microphthalmia (having smaller eyes than normal).  Eventually the rest of the nerves become effected, including the front limbs, making getting around almost impossible.  All affected dogs thus far have either passed or been euthanized to prevent suffering prior to a year of age.

The genetics:
If you can remember back to high school biology, each offspring will inherit one set of genes from each parent- this applies to all genetic traits.  Because JLPP is autosomal recessive, a puppy would need to inherit a bad gene from each parent in order to be affected.  This means that if 2 dogs that are NN (negative/normal) are bred, they will not produce a puppy with JLPP.  If a carrier (Na) is bred to a negative (NN) then 75% of the pup (on average) will be negative (NN) and 25% of the pup will be carriers.  HOWEVER, when 2 carriers are bred, then 1/4 of the pups will be affected and will die.  It is not necessary to cull carriers from a breeding program, but you must be very careful in breeding and ONLY breed to negative (NN) dogs.  Carriers are non-symptomatic (they do not have any issues related to JLPP)- but this also means that one CANNOT POSSIBLY DETERMINE if a dog is a carrier or not simply by looking at the dog.  Here is a punnett square showing the possible outcome from breeding to carriers. 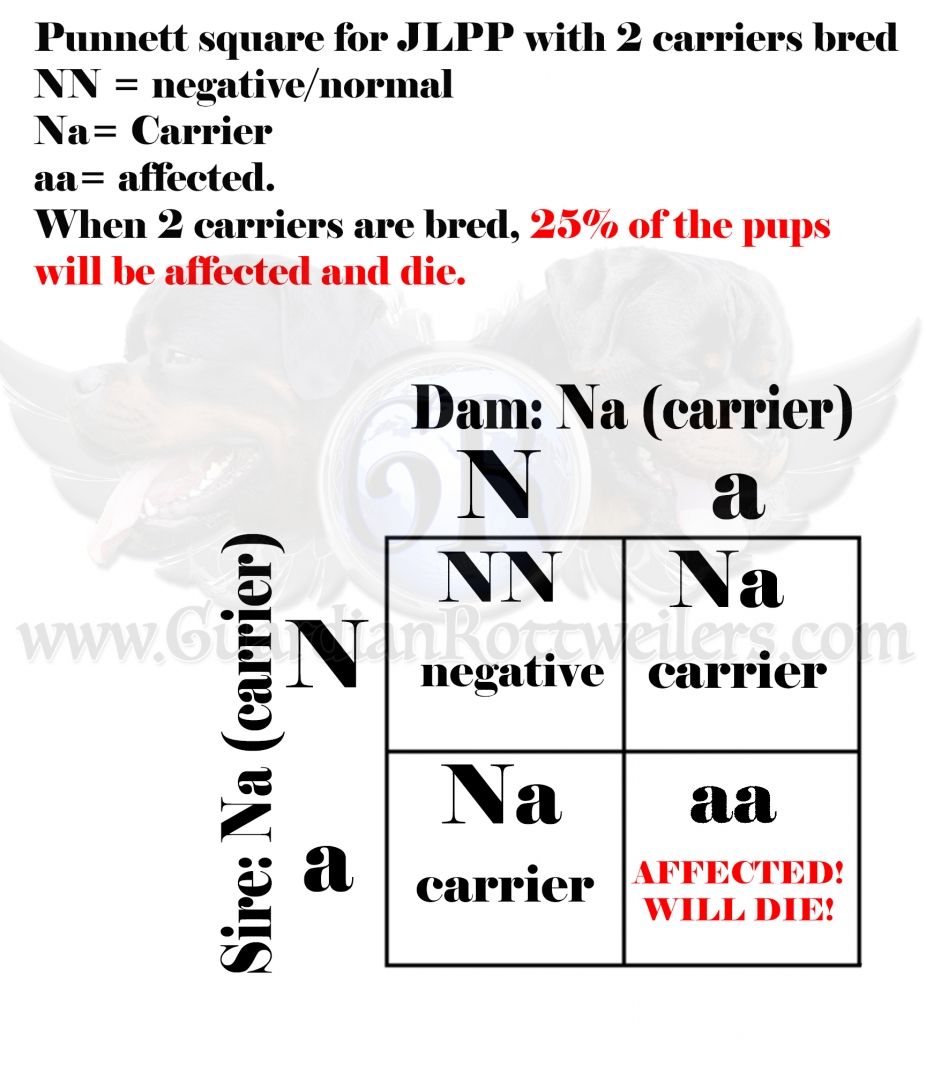 1. TEST ALL YOUR DOGS for JLPP
2. don’t use a dog for breeding which is JLPP m/m with a high risk
3. you can use anytime a JLPP N/m with a JLPP N/N dog – it should work out pretty good
4. don’t reduce your breed stock from JLPP N/m dogs – we need the whole gene pool – just be aware of what you can do
5. Don’t wait – do it NOW – the time is ticking. Our breed has no time to loose in endless discussions.
6. Do all of it for the Love for Our Breed – the Rottweiler
I would like to add: I got from several countries NOW PM that JLPP cases are or were also in their country. So JLPP is mostlikly World Wide!!! I all have to work together. Don’t let dog politics, personal issues or what ever be in the way!!! Finally I want to thank Edgar Hellmann ADRK head breed warden for all is efforts in this matter and his fast actions. Thank you EDGAR!!
Thank you so much for our breed
Anton Toni SpindlerWhy would Spindler suggest that the carriers still be used in a breeding program?  Wouldn’t it make more sense to simply cull all carriers from a breeding program as well?  That way JLPP is completely eliminated?  This questions was explained very well in a seminar by Dr. Dennis Obrien.  I am including the whole seminar, and it is such a good watch.  But essentially, here are his remarks on narrowing the available bloodlines:
“The problem is that ALL DOGS are carriers of potential disease causing mutations.  The recessive mutations aren’t recognized until they become widespread enough in the breed that the odds of two carriers breeding become high.  Abandoning one entire line for another only ensures that whatever mutations are lurking in the new line will be the next problem to be dealt with.  In addition, all the desirable traits that made that first line popular to begin with were thrown out with the bathwater.”

Breeders, you must test.  Buyers, you must be equally vigilant and only purchase a puppy from a breeder that tests.
You can order a DNA test for JLPP from the OFA website:
http://www.ofa.org/dnatesting/lpp.html