Hard Working and High in Courage…

Rottweilers are considered to be one of the oldest breeds of dog with an origin way back to Roman times where they were used as herder or driving dogs.  They accompanied the herds following in the wake of the Roman armies through Switzerland and into Southern Germany.  In the years 73 or 74 AD the 11th Legion of the Roman Empire shut up camp on the bank of the river Neckar in the Wurtemberg area of Germany. They marched over the Alps with the Roman legions where they protecting the humans and the cattle from wild animals and theft and  herded the cattle.  Because of this, it was necessary to have a dog that was loyal and faithful, calm yet confident.  It needed to lovingly care for and defend the young of the heard and its master, yet still be able to drive thousands of pounds of cattle and protect them from wolves and thieves.  A deep ribcage was required for the lung capacity needed for the long miles of running around the herd.  Strong bone and muscle were also a must.  The large head that the German Rottweiler is now famous for also served a purpose.  The large powerful head is what enables the Rottweiler to have the strongest bite force of any domesticated dog, far exceeding even the Pit Bull and German Shepherd Dog.

In the years 73 or 74 AD the 11th Legion of the Roman Empire shut up camp on the bank of the river Neckar in the Wurtemberg area of Germany.  Many years later, this city became known as Rottweil.  Rottweil, a town in the south west of Germany and the oldest town in the federal state of Baden-Württember, was founded by the Romans in 74 AD.  It was named “Rot Wil” because of the red tiles used in the roof.  (“Rot” is red and “Wil” for “Ville”.)  During the Middle Ages, the Rottweiler was used for bear hunting and subsequently as a cattle dog.  Because there were other breeds endemic to the regions around Rottweil including the Bernese Mountain Dog, Greater Swiss Mountain Dog, Appenzeller and Entlebucher.  These local dogs likely interbred with the dogs brought by the Romans hense the Rottweiler’s similarity to some of these breeds.  Because the Rottweiler was formed purely out of a utilitarian need, conformation, or physical beauty, was not as important as the Rottweiler’s core character and temperament.  However, as form follows function and function follows form, a strong dog with a heavy frame, stocky build and powerful head piece, that was biddable and high in courage naturally developed.  In the 19th century, when the railway became the means of transportation, cattle herding was outlawed and the Rottweiler had to find a new job.  This strong, intelligent dog showed himself useful of much more than just herding cattle (although, of course, that too is a job that requires and incredible athlete and limitless intrepidity).  He became known as “Rottweiler Metzgerhund” which translates literally to “Rottweil butcher’s dog.”  The Butchers recognized the power and courage of the Rottweiler and bred them for these traits.  The Rottweilers were used as draft dogs for hauling the butchers meat to market and then, once the meat was sold, the money would be tied around the Rottweiler’s neck for safe transport back home.  Unfortunately, at this point in the breeds history, they nearly became extinct.  They were no longer required as drover dogs and soon, their usefulness in hauling would also no longer be necessary. 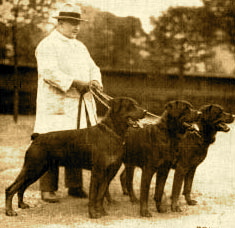 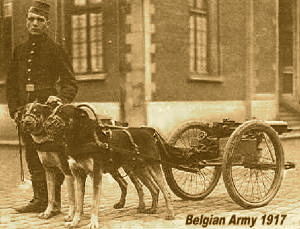 Today, the temperament of the Rottweiler still remains a top priority in Germany.  Along with the requirement of correct physical conformation proven in the show ring, Rottweilers in Germany must also past Breed Suitability testing to ensure that those character traits that made them so desirable for centuries remain strongly in place. 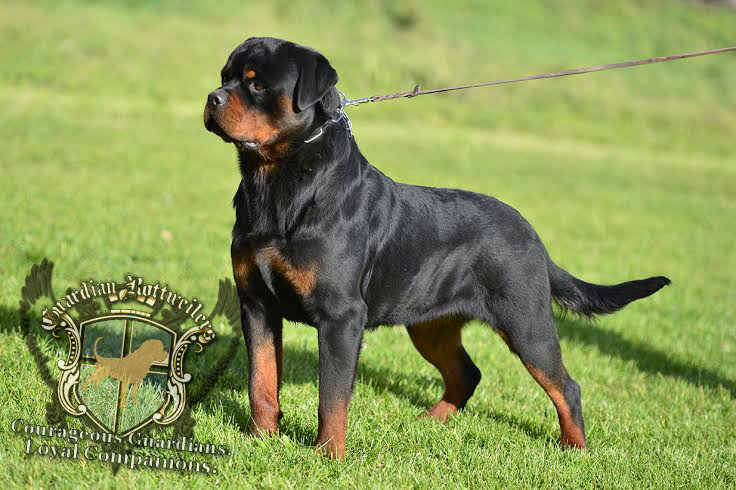 “The Rottweiler is a medium to large size, stalwart dog, neither heavy nor light and neither leggy nor weedy.  His correctly proportioned, compact and powerful build leads to the conclusion of great strength, agility and endurance.” (ADRK Rottweiler Breed Standards)
It is important to note that simply having the “largest” dog does not denote a good Rottweiler.  FCI and ADRK standards call for the male Rottweiler to be approximately 50 kg (or about 110 pounds) and a bitch to be 42 kg (or about 92 pounds).  When a breeder disregards the breed standard and strives only to produce larger and larger dogs, they are not only taking away from the hard, athletic appearance of the true German working Rottweiler (as a dog that is too large will become quite awkward looking and more “mastif” in appearance with a softer frame, “wet” or drooping skin and certainly lack in the rock hard, well muscled, compact frame of the Rottweiler, and of course not have the speed or stamina let alone the desire for hard work) but more importantly is the marked decline in health.  You are asking a heart designed for a 110 pound dog to now function for 160+ pounds and joints that are already prone to hip and elbow dysplasia to now support abnormal growth spurts and extra weight.  You end up with a dog that in not only physically incapable of performing the tasks required of this breed (he cannot run for miles to herd, nor can he jump over and through obstacles as a police or personal protection dog) but he now also has a much shorter life span due to the unnecessary stress exerted on his body.

Temperament is extremely important at Guardian Rottweilers, however, we also do not want our dogs/ pups to lack physically.  We do not want a dog with a small, frail frame with elongated and narrow heads and faces, narrow rib cages, and skinny limbs lacking sufficient bone or muscle substance.  It is sad to see that many breeders either through ignorance of the breed standard, or disregard, produce dogs that are at one extreme or the other–either way to large and awkward, or too frail. 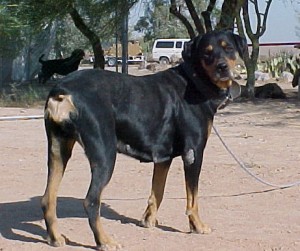 Above, is a reported 120 pound female Rottweiler that is large, but very poorly built.  She is lacking in head, bone and muscle substance, and has a very soft topline.  Below right, the other extreme, a small, thin Rottweiler also very much lacking in head piece and poorly placed and poorly carried ears, but with a much more solid top line (back is straight) because there is not too much excess weight pulling and stressing the dog’s body.  Although significantly lacking in substance, the dog on the right is actually much healthier and sound then the one on the left.  She will not have the added stress on large muscles such as the heart or on her bones and joints like the over-sized dogs will. 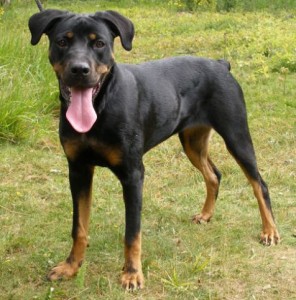 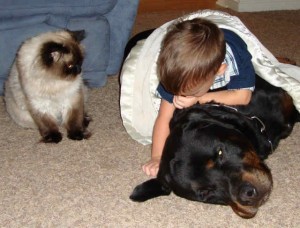 “Good natured, placid in basic disposition and fond of children, very devoted, obedient, biddable and eager to work. His appearance is natural and rustic, his behavior self assured, steady and fearless. He reacts to his surroundings with great alertness.”  (ADRK Rottweiler Breed Standards)

The Rottweiler is a very intelligent dog of extreme hardness and adaptability with a strong willingness to work, making the Rottweiler especially suited as a companion and guardian.

At Guardian Rottweilers, we strive to produce puppies with typical German conformation- strong, solid hearty dogs.  But our number one focus has and always will be the temperament.  A beautiful dog is nothing without the heart and mind of a true Rottweiler.  It is the true Rottweiler heart and soul that I fell in love with as a child and grew to admire as an adult when I had the privilege to see and handle them working.  We travel all over Europe selecting very carefully the dogs used in our breeding program.  Each dog is selected specifically for the drive, temperament, conformation and bloodlines.  Our goal is to produce beautiful, balanced dogs with superior intelligence, good working drive, high courage, and strong loyalty, devotion, and affection.  We expect a lot out of our dogs.  They are not merely lawn ornaments.  They have the most sacred duty of  watching over, loving and protecting my family and my children.  Our Rottweilers are not simply dogs, they are Guardian Rottweilers.