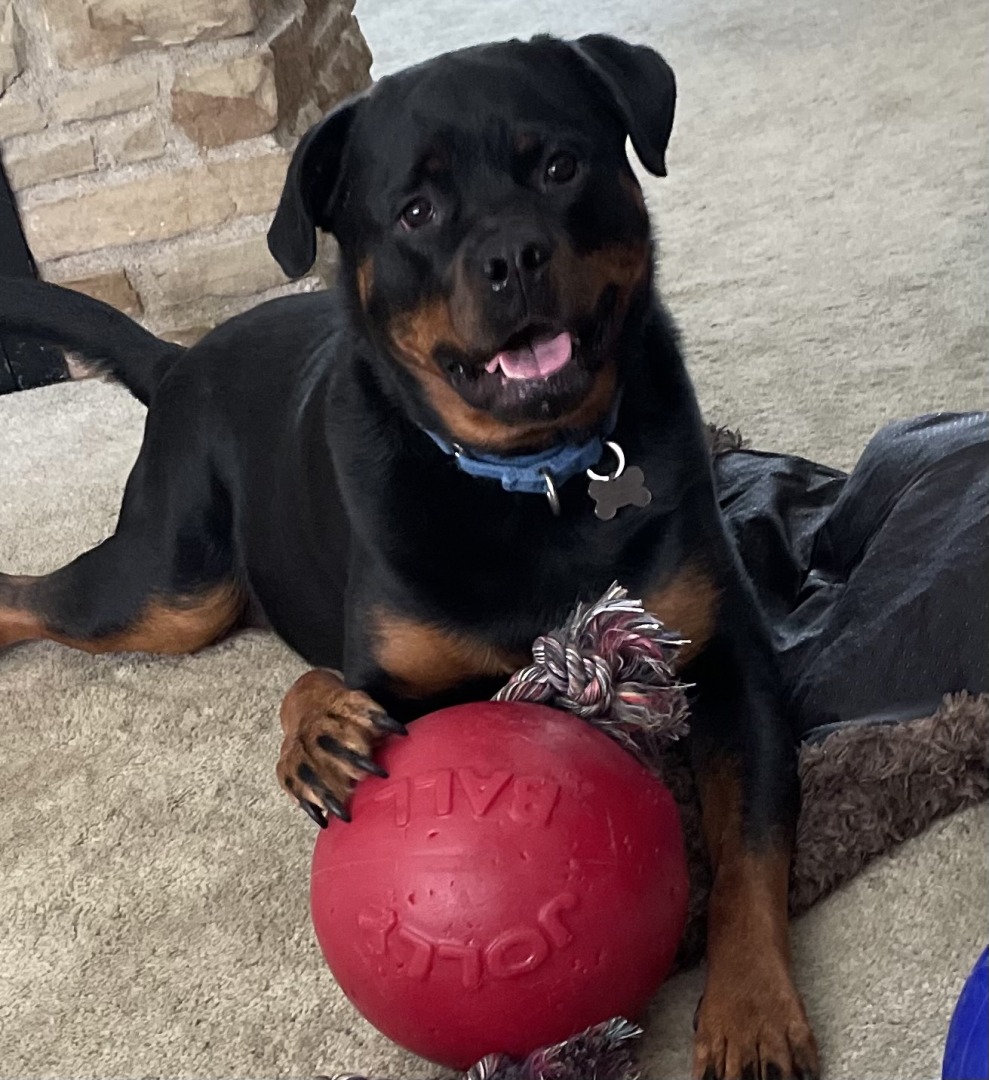 Guardian Cupid Von Gottschalk aka Schatzie is fully house trained and will ring a bell to go outside and paw at the door to come back in.

She is up to date on all vaccinations and takes her Heartworm medicine religiously.  She has never had any internal or external parasites.  She is spayed.  No known allergies.

Schatzie has had her basic obedience training and has been raised around children of all ages and has done very well.  She was also raised with other dogs in the home and loves to watch the deer and bunnies in her yard.  It is unknown how she would react to cats or other pets as she has never been around them.  Unfortunately, Schatzie recently attacked another dog living in her home.  It is believed she was only trying to be protective of a younger Rottweiler (6 months old) who was playing with the dog who was attacked.  The victim of the attack yelped while playing with the puppy and owner thinks that Schatzie may have thought it was the puppy who yelped and jumped in to protect it as she has been very motherly to the pup.  According to the owner, at this time, “An all-out fight ensued and the [boxer] sustained many puncture wounds to her head, neck and ears.  While trying to break up the fight I also was bitten three times.  I realize that Schatzie was only doing what her instincts told her to do.”

Schatzie is fed with Red Paw Power Edge 26 Food available from K9 Cuisine on line.  She loves to eat carrots and ice cubes with an occasional marshmallow and has no known food sensitivities.

From her current owner:
Schatzie had her well visit at the Vet in April and was healthy.   At that time, she received all of her immunizations.  She is crate trained and will go to her kennel with the command “Kennel” as well as at bedtime if you say its night-night time.  Most of the time she knows when its bed time and when I get up to refill my water bottle she goes to her kennel.  She also goes to her kennel if she knows I need to leave and she cannot come.

Schatzie loves to play with balls (it’s her drive) small balls like Chuck it sized rubber ball she loves to chase.  She will play soccer which is her favorite winter game with larger balls.  Schatzie’s favorite toys are balls and bones.  She loves to play in water streaming from the hose.  She jumped into a pool once to get her ball but swims like a carp.

Schatzie has always been a very loyal, attentive, playful, trusted companion.  When my grandson was home schooling during the Covid lockdown she was always at his side.  When I have had to board her, she behaved very well and was awesome with the family she stays with.  She has always been able to be around other dogs of all ages.  The only behavioral issue has been the incident mentioned above.   She is an alpha female but up until this incident has been a gentle alpha.  The most she has ever done is come between me and another dog.  She wants to make sure she gets all the love.

Schatzie has always been a gentle, loving, loyal companion and I can’t remember a time she has met anyone who she didn’t like.  She loves meeting new people and car rides.  She does not seem to be afraid of thunder or fireworks.   We lived in a neighborhood that did fireworks every year and there were never any behavior or issues related to them.

Schatzie has had a few ear infections but none in the last 2 years.  She had a sprain in one of her rear limbs when she was younger, but made a full recovery without any further issues.  All medical documents will go to the adopting person.  As a puppy she had an issue with one of her toe nails so she doesn’t like to have her feet touched or nails trimmed.  The only surgery she has had is when she was spayed.

From her trainer:
This message is in reference to Schatzie. My wife and I have been lucky to have met and cared for Schatzie for the past couple of years when Sue is out of town. We run a rover.com business. I’m also a police officer and I’m comfortable with high drive dogs. Schatzie is very strong, smart, and loving. She has always been a special part of our family here. Schatzie is very attached to me and I have spent countless hours playing fetch as she has a very high ball drive. She will spit the ball out at your feet and never stop fetching . We run her off leash in our yard as she has a great recall command. We always use a pinch collar. I normally do a 2 mile walk at night with her. She’s perfect on a leash, left side. Schatzie does claim ownership to our home. I could leave the doors unlocked and no one would be dumb enough to enter if she was behind the door. She is cautious when meeting new people that come over. We have 3 kids and we are all very active. I don’t normally mix dogs that are not from the same household. We always cared for Schatzie and her cousin Z who’s 6 mo old. They play hard, but had no issues with the two of them. Schatzie is crate trained and gladly crates up with out any issues. She wants attention and shows this by slightly tilting her head and staring at you. I welcome her and feel comfortable having my face in her face. It’s no doubt we have a great bond. I trust her, she trusts me. When I have had enough I can slightly raise my voice and tell her to lay down…she always does. If she sees her ball and goes for it she will knock over bar stools to get it! We will miss her dearly. 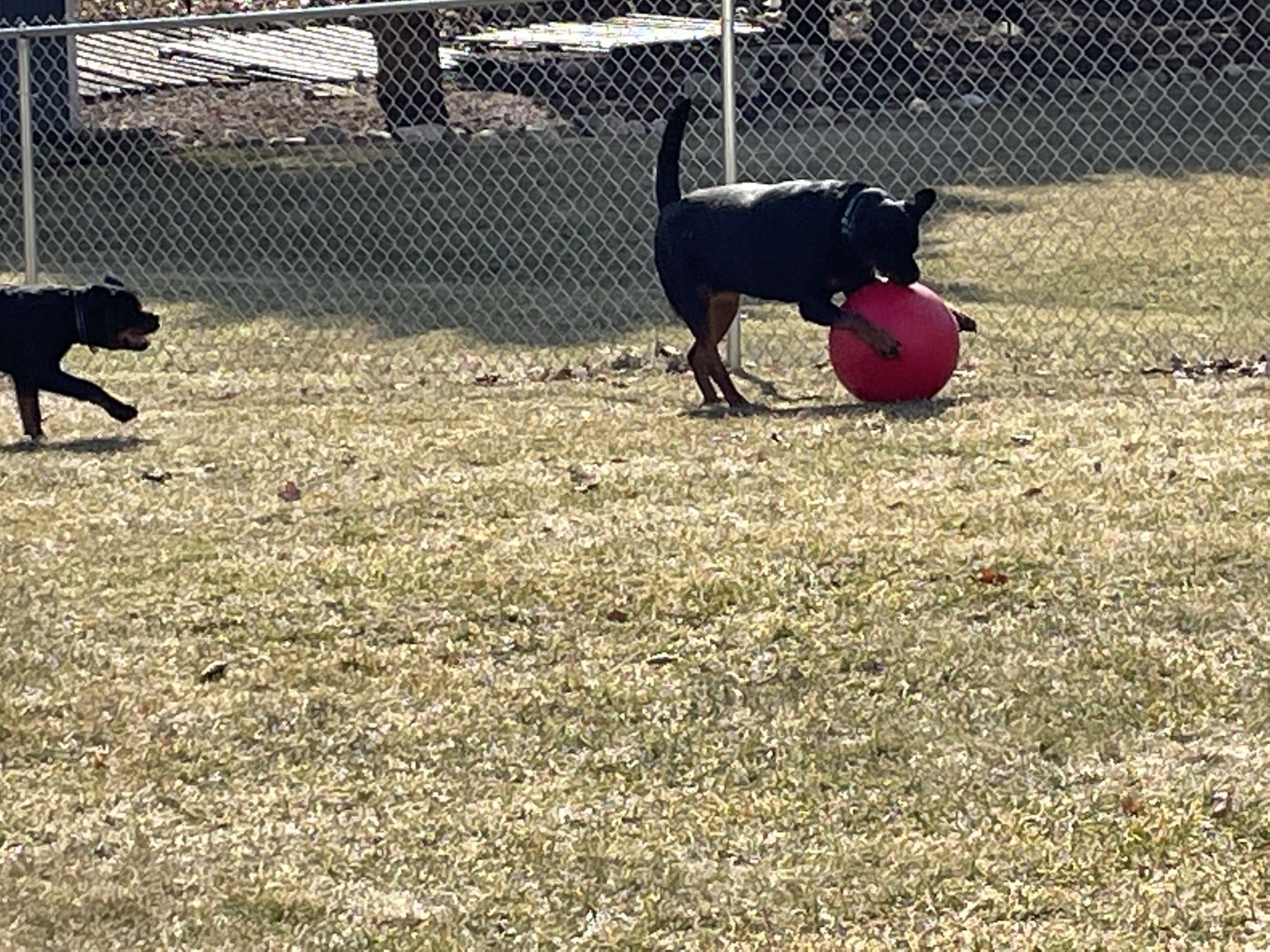 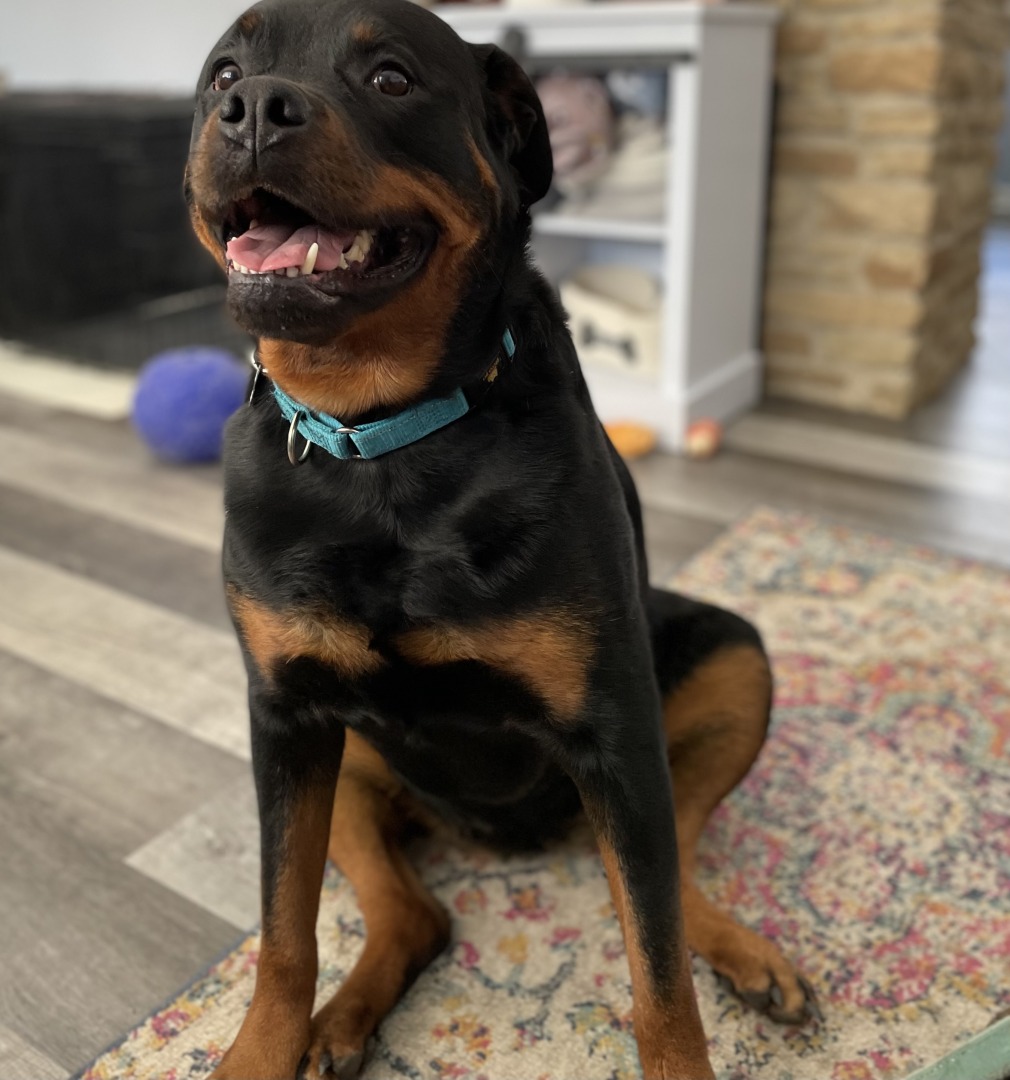 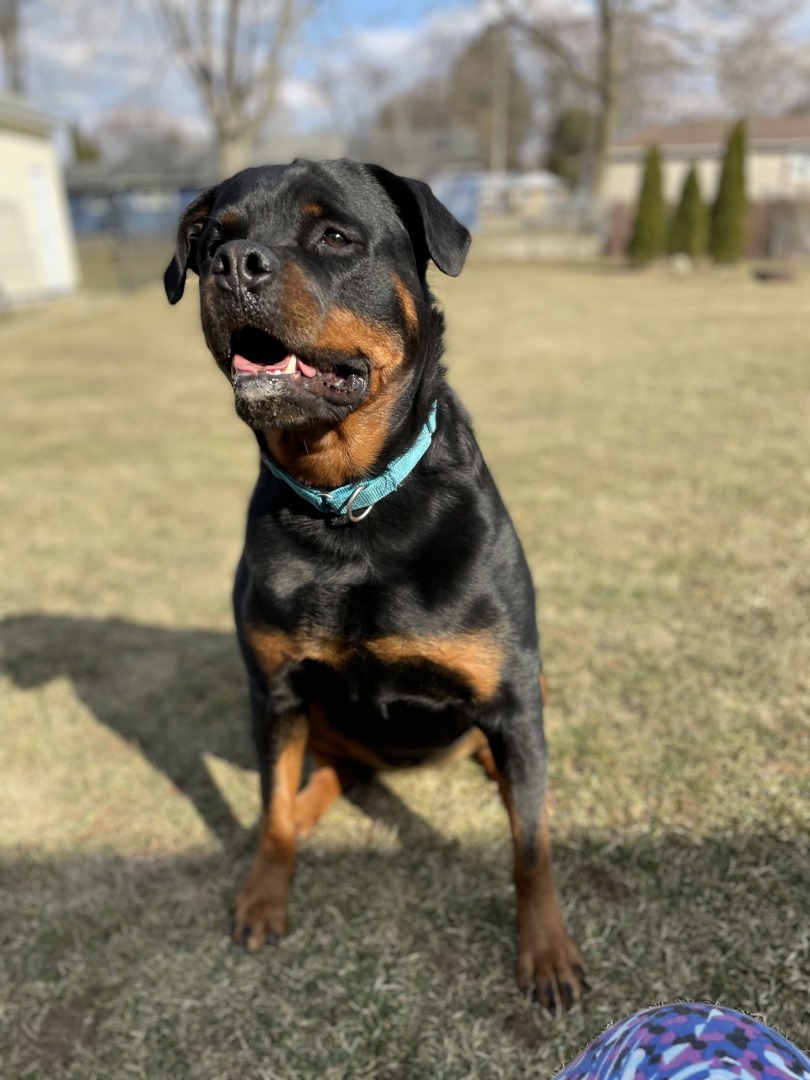