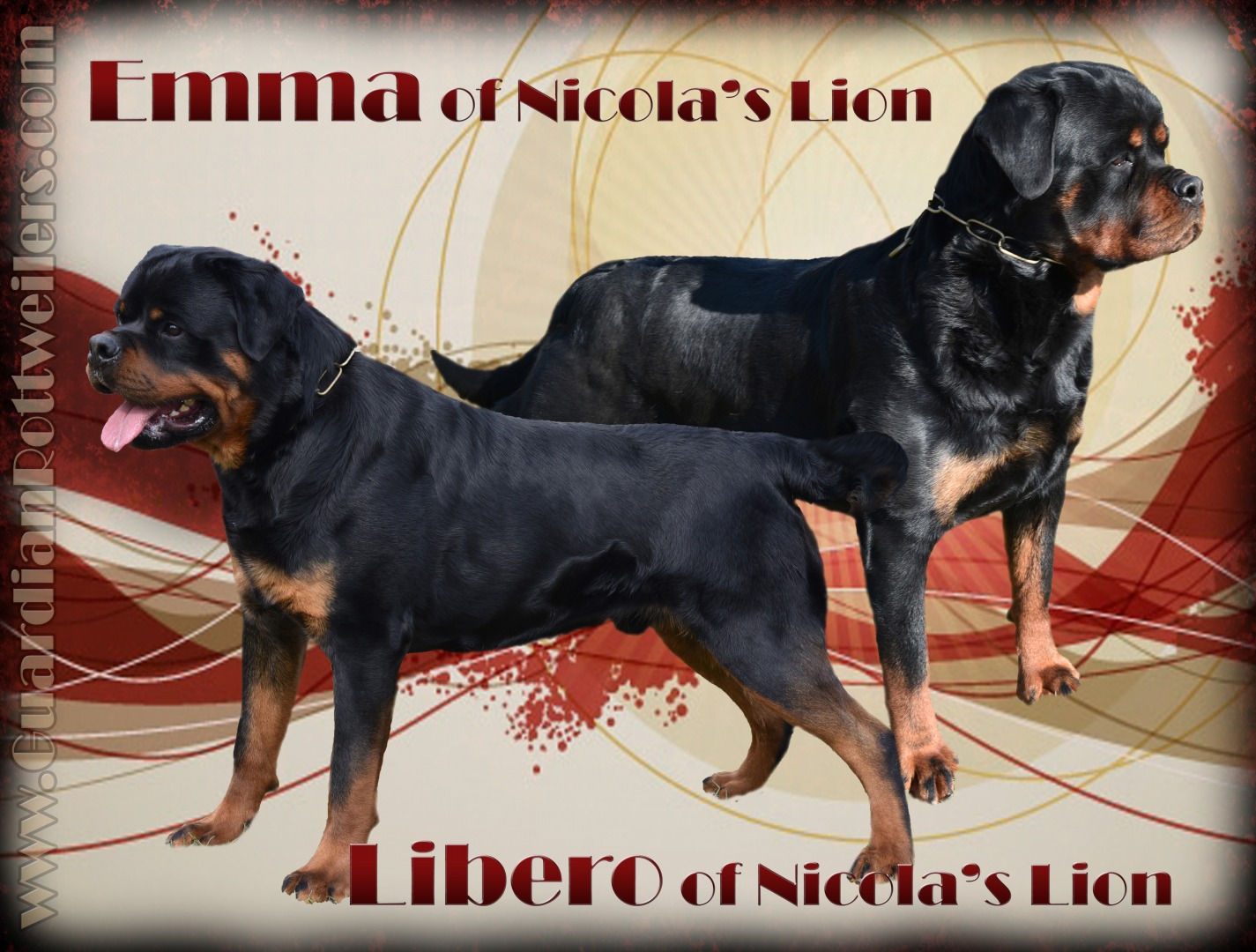 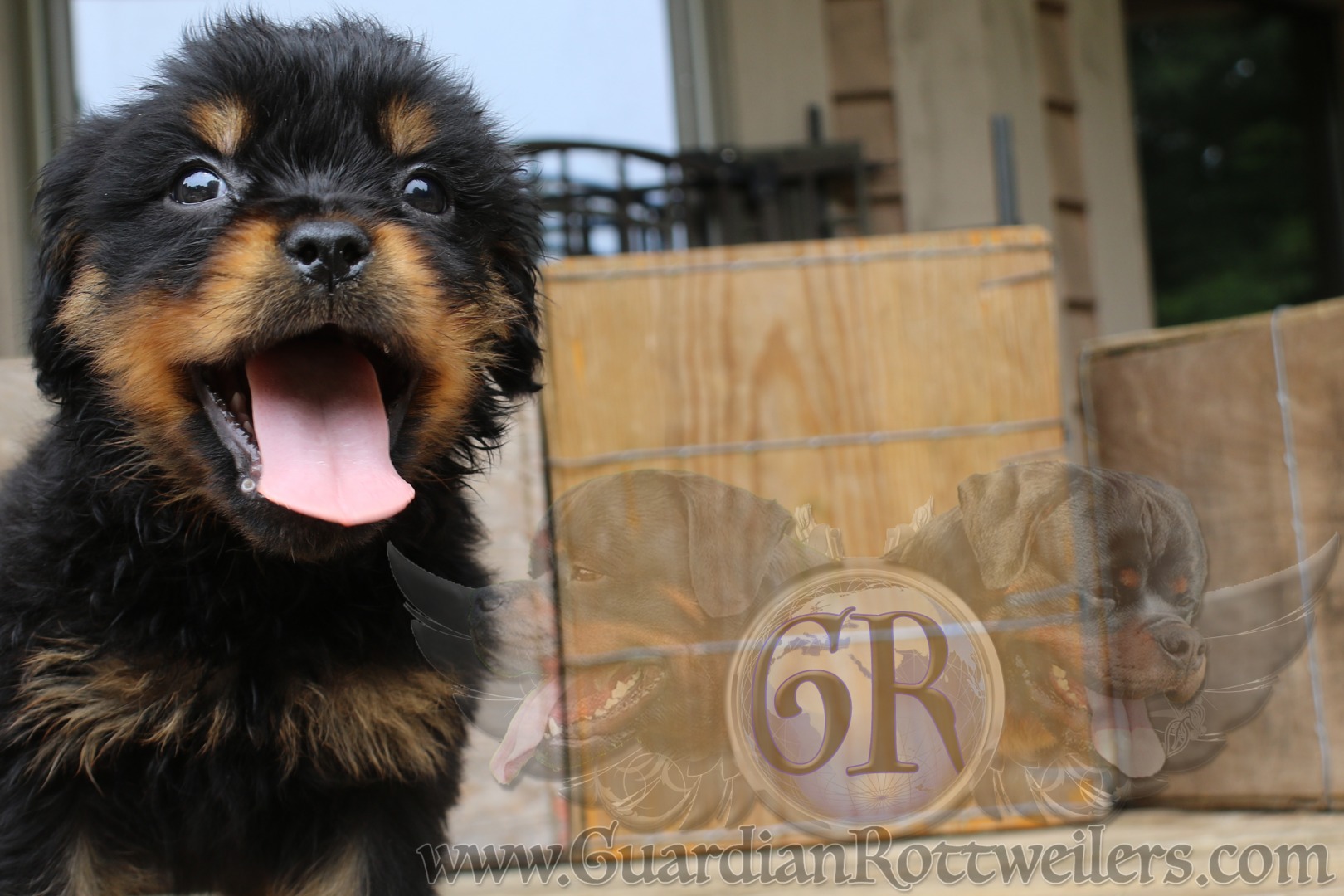 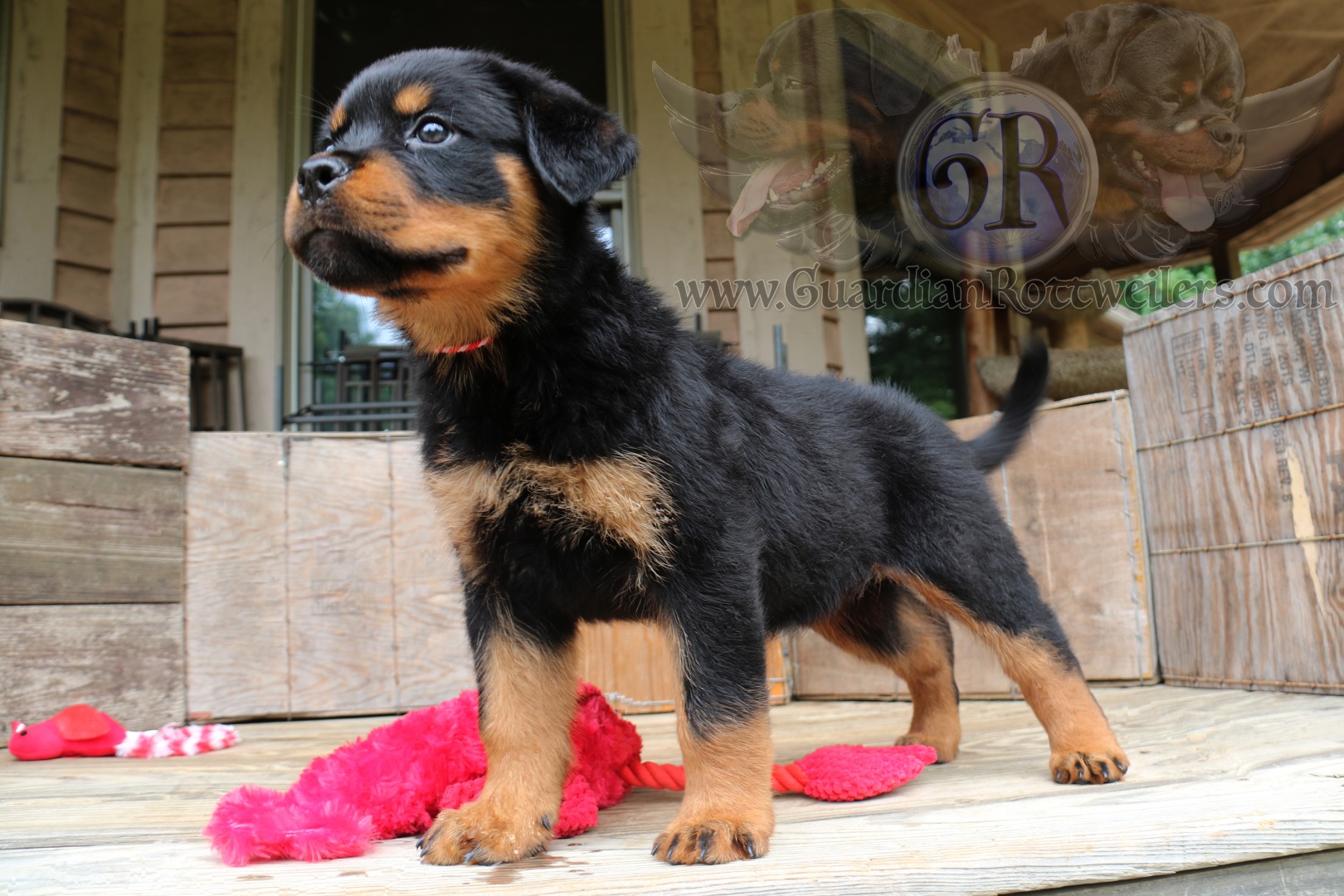 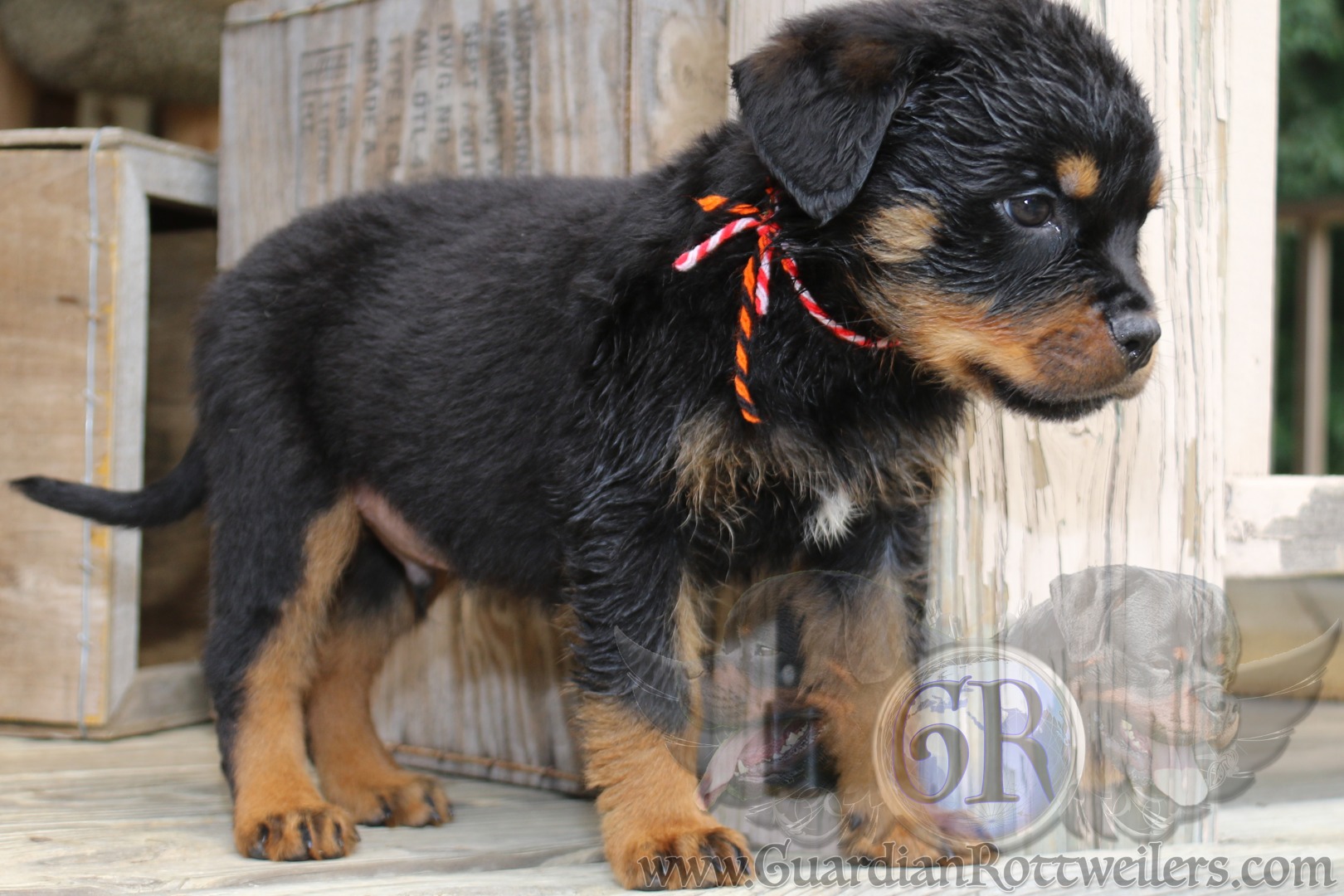 Expecting a whole lot of just absolutely incredible with this breeding!  Emma, on top of being one of the most substantial females we have ever worked with, is full sister to Edison, who has already proven himself to be a producer to take note of.  She is paired with young Libero who promises to easily become one of Nikola’s most exceptional males (which is also saying something considering the plethora of world renowned top producing males Nikola has produced!)  This litter will be a linebreed on Masuer of Nicola’s Lion- my second most favorite dark night of all time (second only to the late, great Crom, one of the loves of my life).  I am so very excited to see what Emma gives me and am expecting extreme bone and substance, large, strong, pronounced head types, and that character, temperament and drive that Nikola has become world famous for.

I hope you’re having a good morning! I just wanted to give you an update on how Tiara’s first night went.
Absolutely in love! She’s the sweetest thing. She follows me around everywhere and is so gentle. I was worried about puppy bites, but so far she hasn’t tried to chew on anyone. In fact, she’s been really good about chewing in general! So far, we haven’t had any issues. I know that’s subject to change as she gets comfortable, and as she starts teething especially, but so far it’s all good signs. 🙂
I’ve tried to keep people away for the most part so she can settle in, but of course everyone I live with, and my little nephews who live very close were dying to meet her. She was so good with everyone! A little on the shy side, but absolutely ready to kiss and cuddle. Lol. My dad is definitely on the gruff side, “I don’t want the dog to lick me!” And it’s like she knew. She just looked at him and laid on his big stomach. Lol. How can anyone not love that?
Our biggest priorities right now are potty training and crate training. We’ve been pretty good about getting her outside… pretty obsessively actually and she hasn’t had many accidents. She’s had a couple, to be expected of course, but I’m happy to say the majority of her potties have happened outside. So far she has not had a pooping incident inside, so fingers crossed for continuing that trend. Her poop does seem normal though, and she’s gone three times since she’s been home. She has been eating well too.
First night in the crate was… a bit of a struggle. Lol I can tell she’s been spoiled! She cried a lot at first, which was absolutely heartbreaking to hear. I couldn’t stand it for long, so I moved her to my bedroom (had her in the kitchen) and she did much better there. I think she just didn’t know what to do all by herself. She calmed down when I brought her to my room though, and I put my hand in the crate with her and she liked that a lot. She fell asleep as peacefully as can be expected. I think she’s adjusting. I took her out to go potty a few times during the night and each time I put her back in, she’d fuss a little less.
I decided it was “morning” for us today around 8:30 am, since she had a late bedtime. I took her potty and fed her and then she whined and I brought her outside and she pooped! Maybe that’s a coincidence… but I like to think she’s already getting the hang of this. 🙂 I can tell she’s a smartie.
That’s about all the info I have right now! Her first vet appointment is Thursday. So I’ll let you know how that goes. Thanks again for my new best friend. <3
I’m attaching a few photos. I don’t have a ton yet – she’s been keeping me busy. The one of her laying in the grass looking up at me is her right now. 🙂 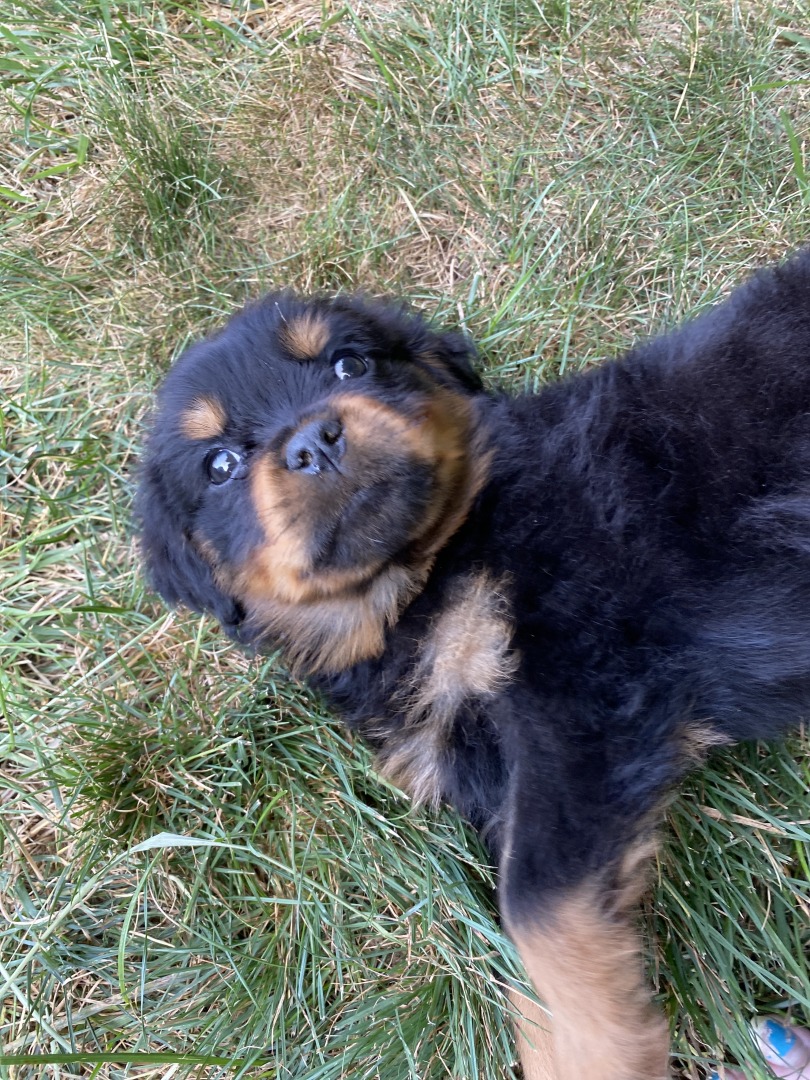 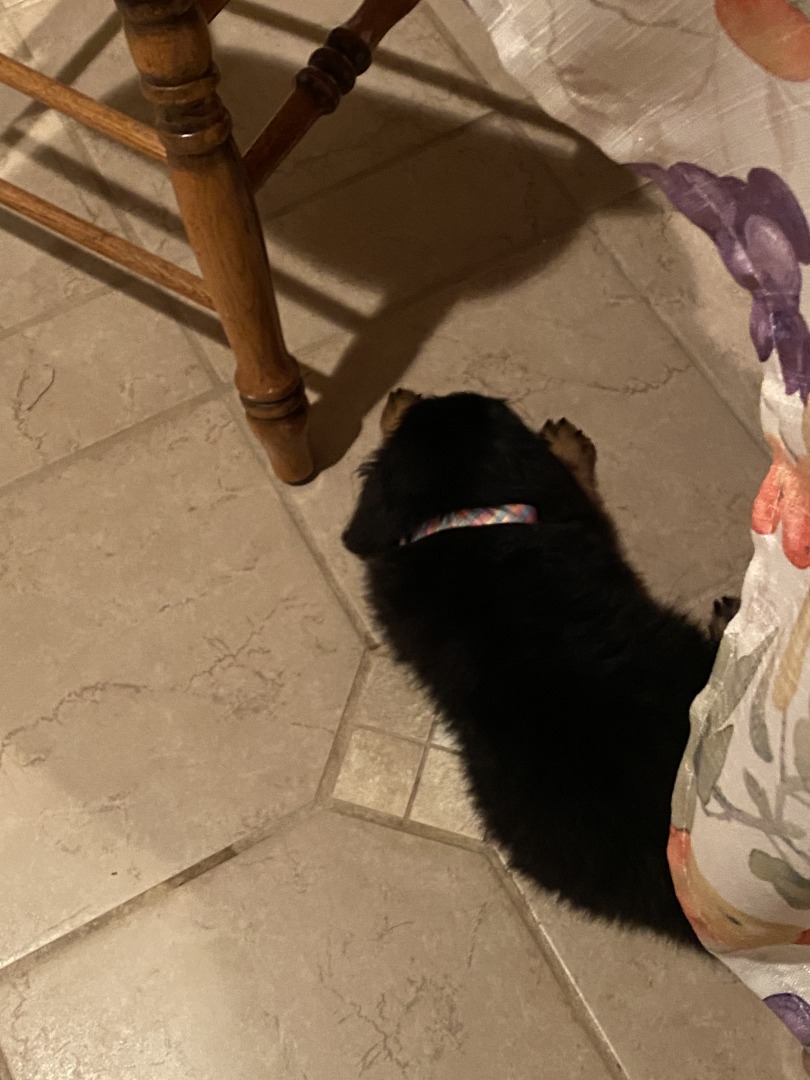 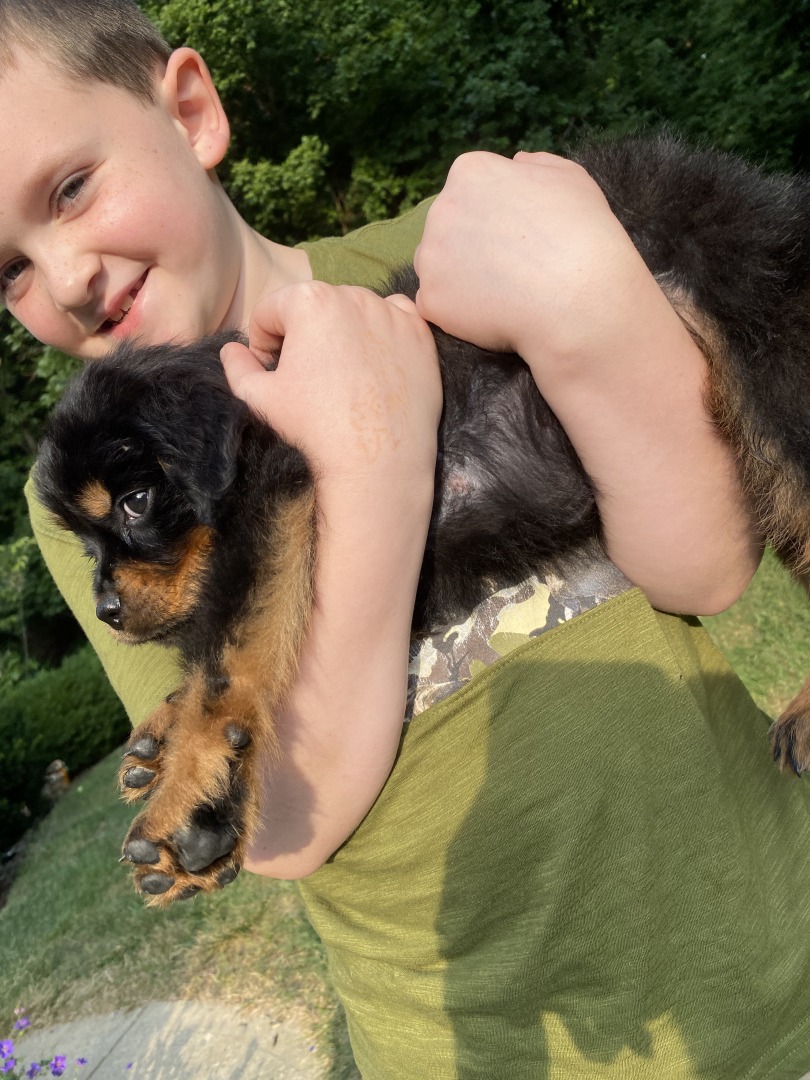 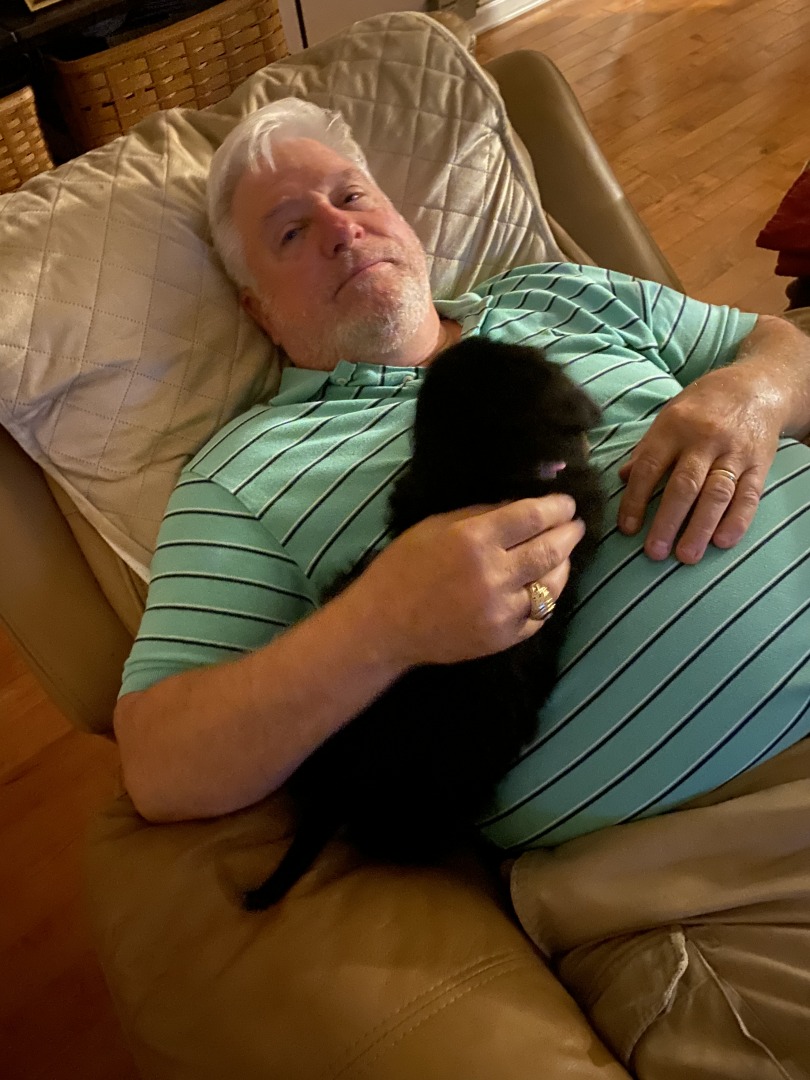 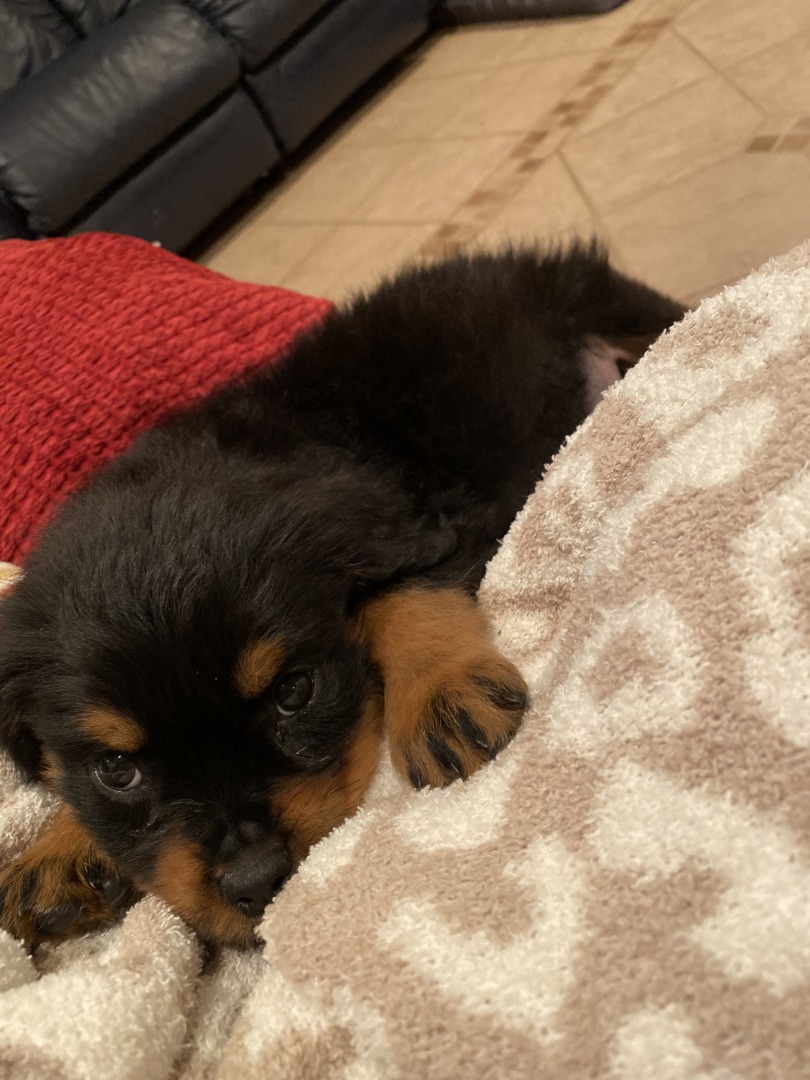 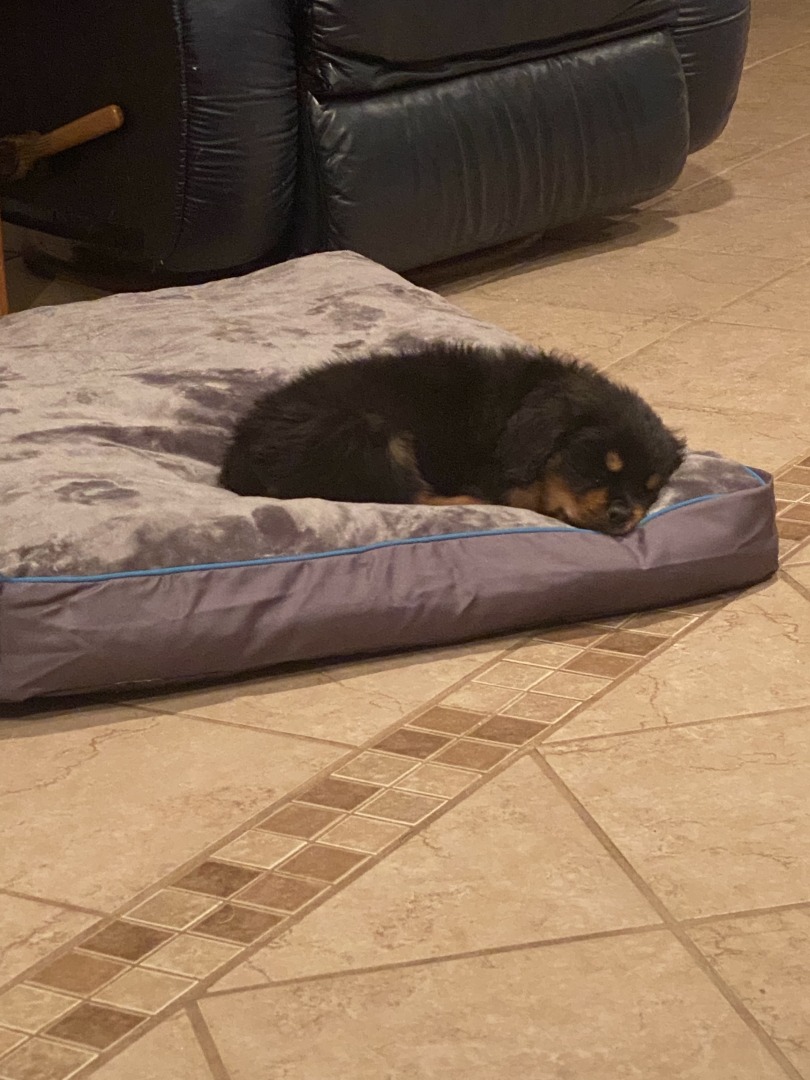 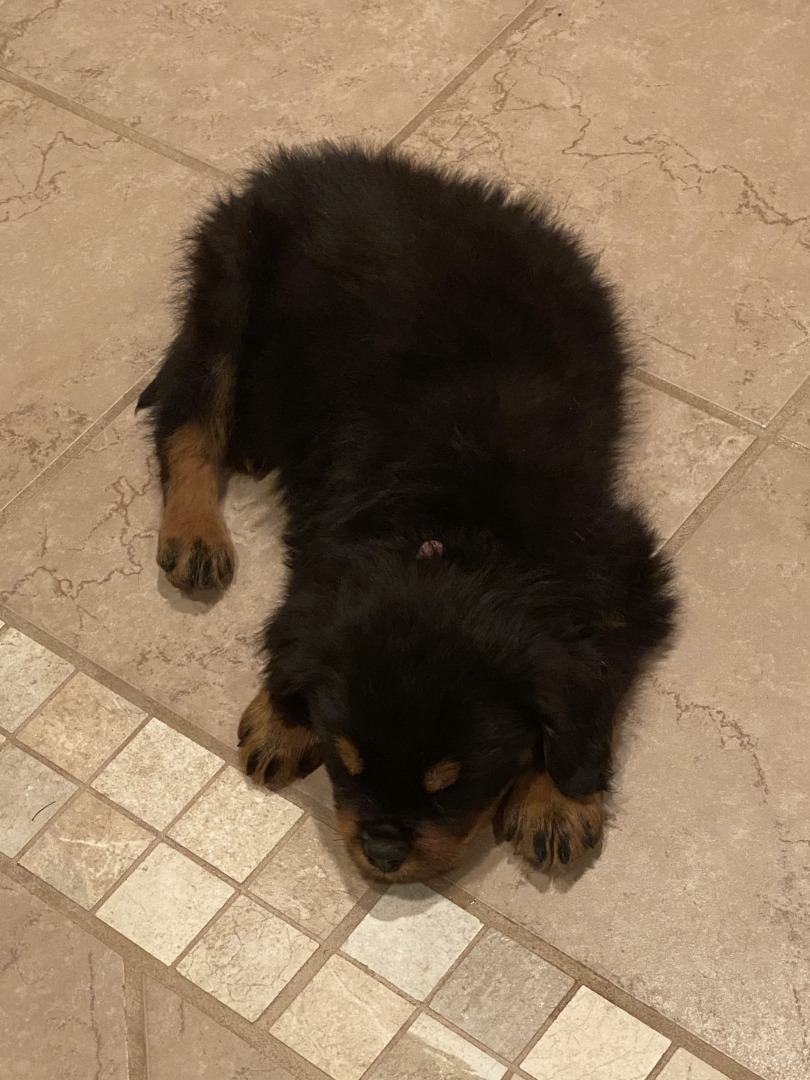 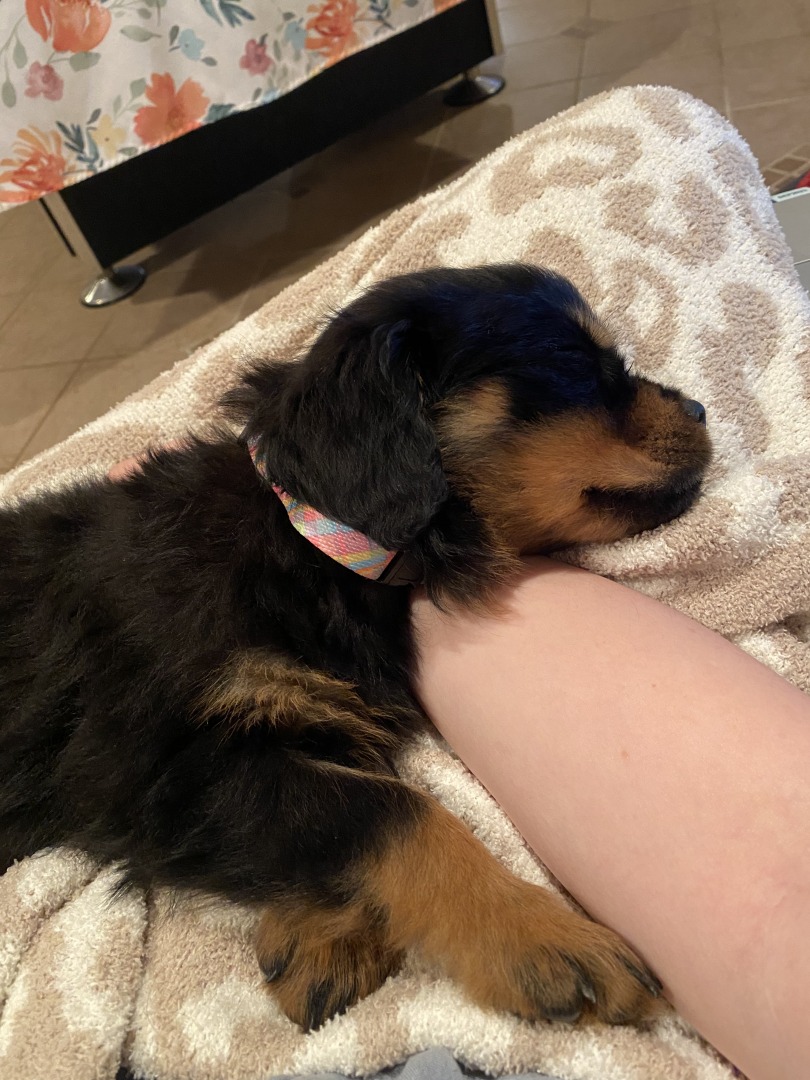 I adopted Luna (Tiara) from you a few months back. I just wanted to check in and say hi! Luna is doing great, she’s so sweet and still fluffy! I’ll attach some photos so you can see her now and her festive gear.
I also wanted to let you know that I have been following your Facebook posts and updates regarding your husband, and your own health scares. I wanted you to know I have been thinking about you and my family is praying for yours

. I hope you have been well and his recovery is going smoothly!
Best,
Lori 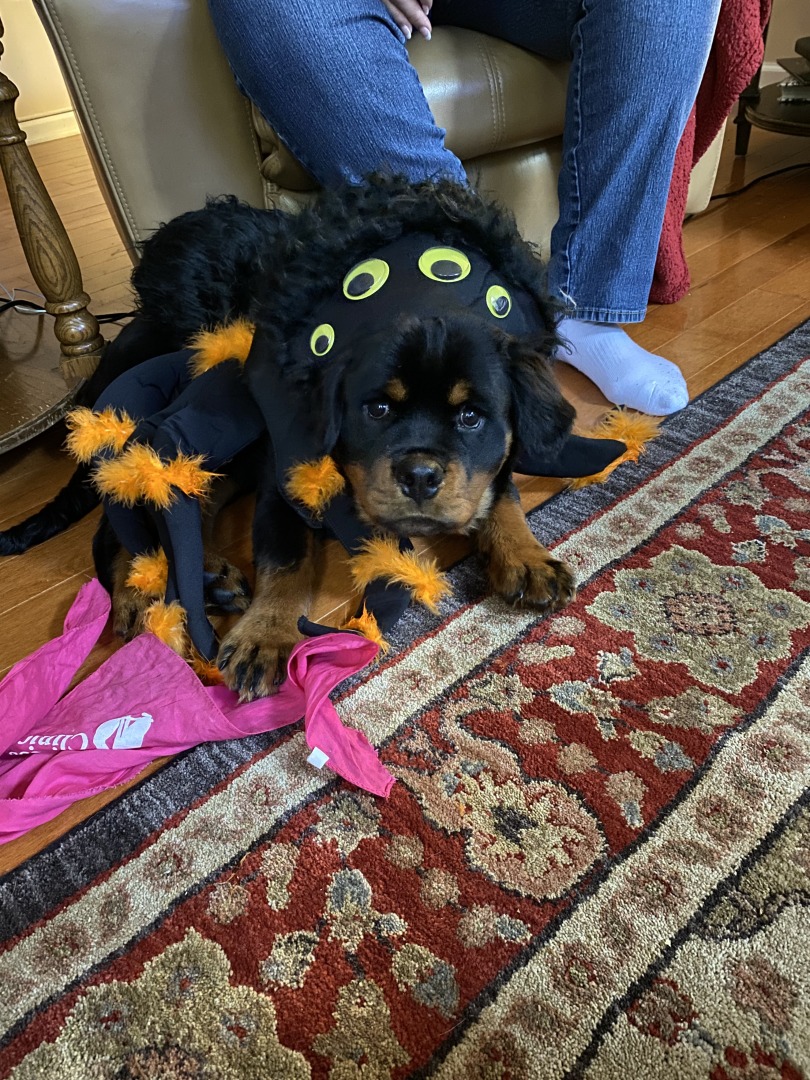 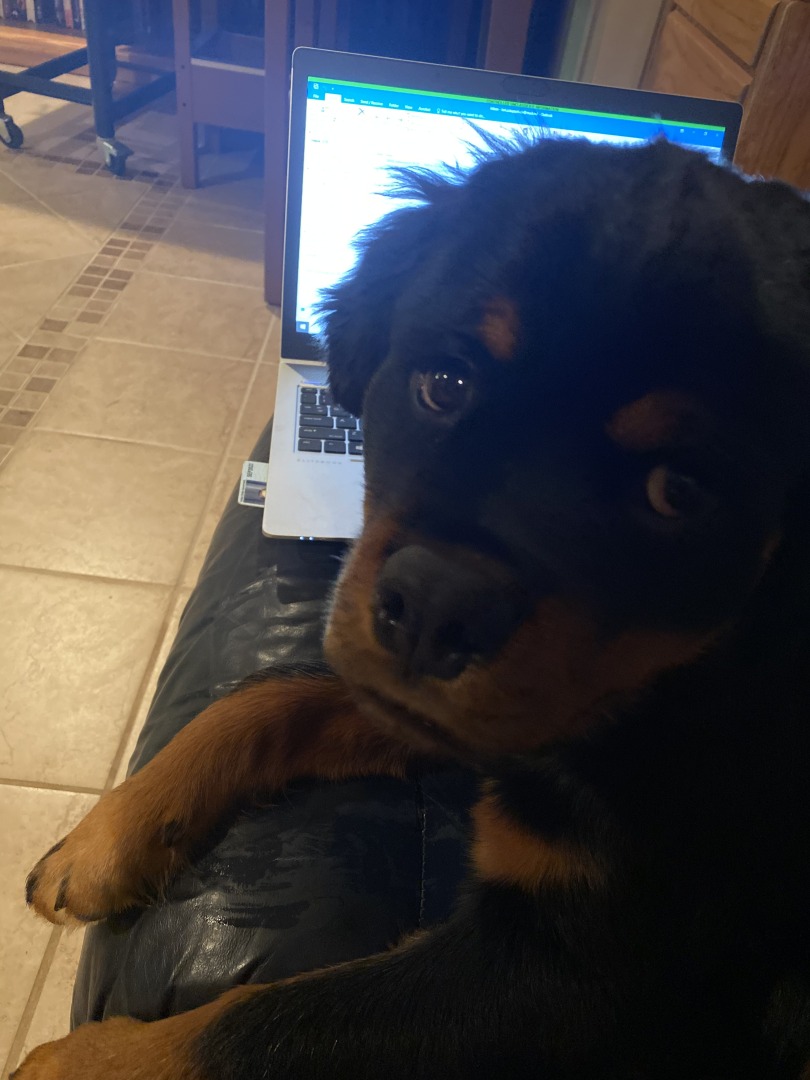