Dear Alice I just wanted to E-mail you and tell you how well it is going at my new home. The two big ones are great they feed me play with me and love on me all the time and some times they even give me treats for going potty outside I know thats crazy is’nt it. I think the little one is scared of me. I was just trying to play and niped at him. Know he thinks I’m trying to bit him. The big ones are trying to get him to play with me again. Well it is time for my pre dinner nap so I will talk to you latter.           Brooks(Brando)

just wanted to give u an update on Brooks he is almost 7months now and is 84LB. we decided to get him fixed (not my idea) he looked so goofy with that cone on. all is good he is a happy little(BIG) puppy we love him to death thank you 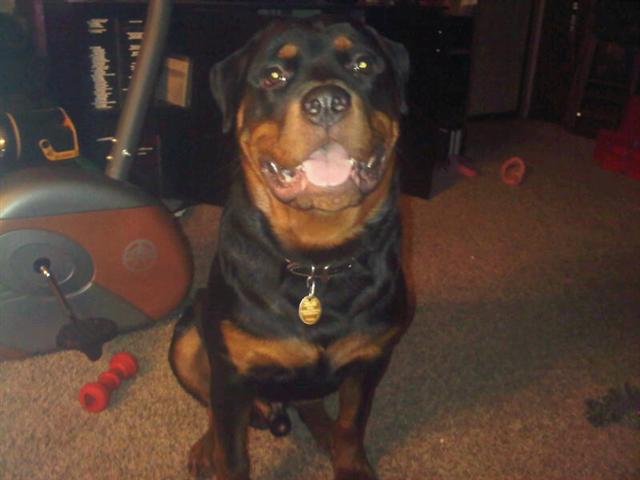 I know its been awhile since we have last talked, but Kalevera (Beni Se Ungo Rot) is doing great. We are FINALLY moved! And he is settling in great at the new place. He is still as stubborn as a bull but he also listens to me very well, and very protective of me and the children. The other night my old man was standing in front of me while I was sitting in the chair and Kalevera was behind him trying to get to me when Russ wouldn’t move out of his way Kalevera decided to bite him on the butt. I will admit it was quite comical. Despite Kalevera getting protective over me he still loves Russ. I just wanted to send you a quick update on how he was doing with a quick snapshot so you could see how he big he has grown. I haven’t started his training in FT Wayne but have started him in obedience training at Petsmart. The trainer is in love with him and told me how she speaks with you all the time.

I have to go for now but now that things have settled down I will keep you updated on his progress.