The question I am asked most often, more than about health, or bloodlines, is why do I breed.  To answer that question, I must start at the beginning.  I have mulled the decision to post this page for many years–partly because I do not want my drama to become the focal point of this website and partly because it is not very professional to involve my personal life.  But, my dogs are very personal to me as are my motives behind saving this breed.  I hope when you see the honest, sincerity in my reasons for breeding as well as my genuine love and respect for this amazing dog, you will truly understand Guardian Rottweilers. 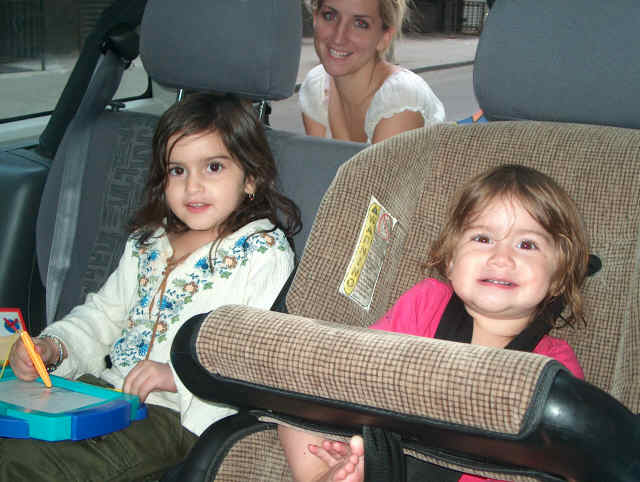 My daughters, Liliana and Tahlia, were born with a genetic bone disease called Osteogenesis Imperfecta.  This causes their bones to be brittle and fracture easily.  We were oblivious to this when Liliana was born, and consequently endured a very traumatic start to our little family.  To make a long story a bit shorter, due to very grave mistakes by military doctors, indifference, ignorance and prejudice, my daughter was ripped out of my arms and stolen from me at four months of age.  It would be nearly 2 of the longest hardest years of my life before I got her back.  You can see a bit more in-depth story on Readers Digest, in their archives. (click to follow the link) 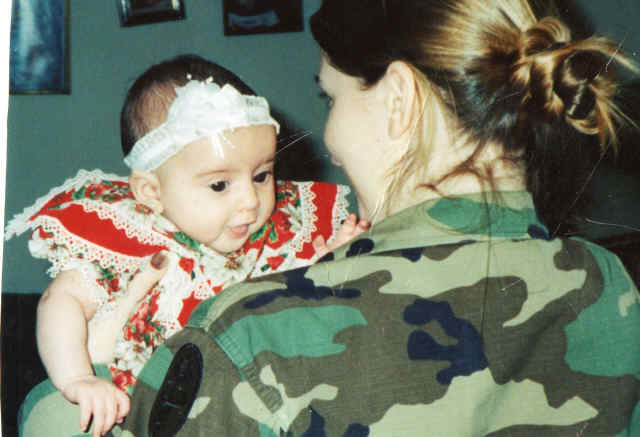 My sweet Liliana with me just a few weeks before she was taken away.
I have always been an animal lover, and thanks to a very patient and understanding grandmother, had quite the menagerie as a child with everything from hermit crabs, lizards, salamanders, birds, turtles, fish and ferrets to the expected dogs and cats.  Although I wanted to take in and adopt every homeless animal whether wild or tame, my fondest memories were of two Rottie mixes, Duke, whom we had since I was four, and Mugsly, whom we got when I was a little older.  They were my best friends, caught many childhood tears, and patiently listened to all my stories. 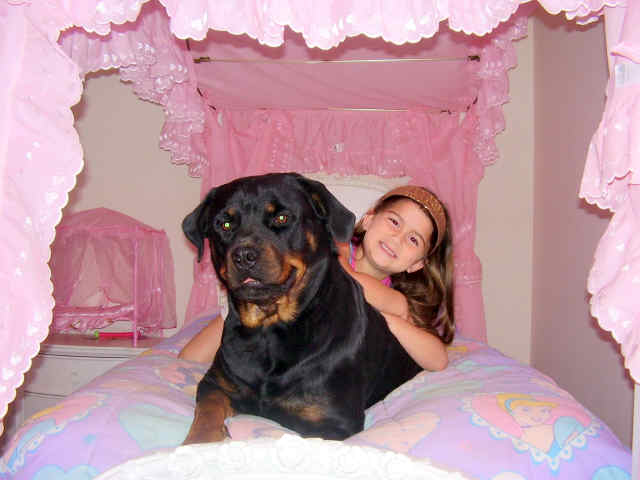 After what happened with my daughter, I vowed to never feel that scared and unprotected again, especially in my own home.  My husband would NEVER again have a gun stuck in the side of his head in the middle of the night and drug out in the street in his underwear like a wild animal, and I would never again worry about the safety of my children.  If you have not seen the suffering of the one you love the most, more than life it’s very self first hand, you cannot fully comprehend the helpless, hopeless feeling of being powerless to prevent it.  Now along with Diesel, who reigns in the house, each of my kids have their own Guardian Rottweiler that sleeps with them in their bed.  Heaven pity the fool that breaks my door open in the middle of the night again because they will not.
I loved the Rottweilers I grew up with as family members.  Thereafter, I had the opportunity, both in the military and as a police officer, to work with other Rotties, and other breeds of working dogs. I came to appreciate these canine soldiers and officers even more for their amazing intellectual capacity, loyalty, eagerness to please and to selflessly work as hard as necessary to get the job done!  They are the most unselfish creatures I have ever encountered; certainly more evolved than most people I have known. 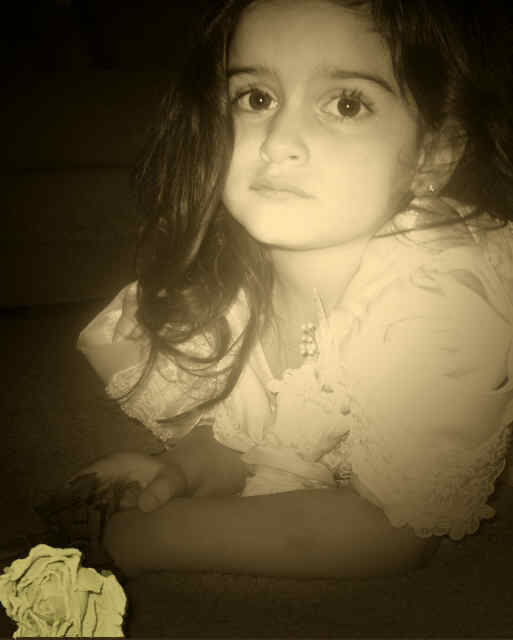 Bella (Spanish for beautiful and Liliana’s nickname) soon after she came home.

Almost as soon as we got our precious Liliana back, we got Diesel.  He was so much more than the Guardian of my home and protector of my children.  He was my rock for all the hard days and he was solace for my daughter who still suffered nightmares and insecurity.  If you have never owned a Rottweiler, you cannot fully grasp their incredible capacity for such deep understanding and devotion.  They can sense when you need a shoulder to lean on or cry on, and offer comfort without judgment.  They will lay down their life for you without a moment’s hesitation, not because they have “been trained to” but because they love you more than they love themselves–unequivocally and unconditionally.  A dog that has been mistreated or abused, and will still lick the hand that causes their pain does not do so because he has forgotten, but because he has forgiven.  He still desperately seeks to be loved even a fraction of how much he loves you. 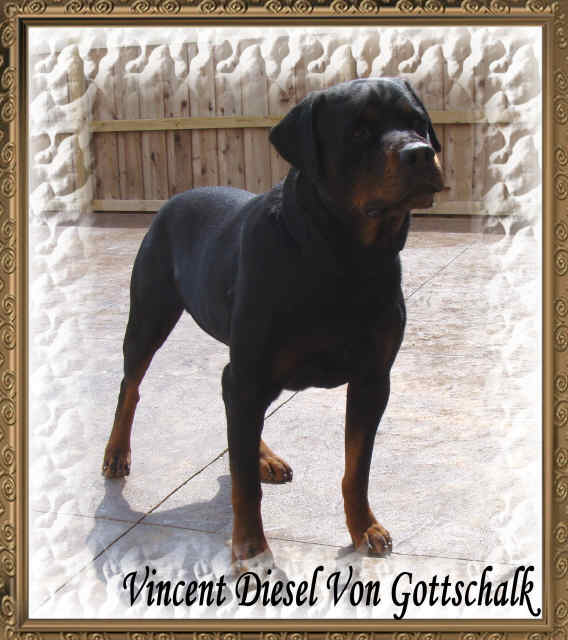 After we received our settlement, we bought a home that our children could grow up in, and we invested the rest in Guardian Rottweilers.  I wanted to give back to this amazing breed and to the dog that, in more ways than one, saved my family.  We did not take the decision to breed Rottweilers lightly.  I spent years researching pedigrees and bloodlines.  I knew specifically what I wanted.  I had been spoiled by Diesel, and nothing less would do.  I needed a dog that had that “German Rottweiler” look with the heavy bone, solid frame and beautiful, unmistakable head, but more importantly, I needed dogs with that courageous and affectionate temperament and intelligence.  The more I researched the true German Rottweiler, the more I admired it.  I realized that there was a purpose to the beautiful physique.  The deep chest provided the necessary lung capacity for all the running required of a drover dog. The well-muscled frame helped it herd cattle, defend both the owners and cattle from dangerous predators.  And that beautiful block head with its powerful bite ensured the safety of each calf in the heard.  The entire temperament of the dog made sense as well, a dog with nerves of steel, courage in the face of danger, a love and devotion to its master strong enough to override and desire for self-preservation coupled with a gentle nurturing side that would patiently care for even the smallest newborn.
But all my research was not positive. It saddened me deeply to learn how this once most valiant and heroic dog, one of the first breeds used as a service dog for both the police and military had been subjected to such neglect.  The breed had been purposefully twisted through careless breeding to produce an aggressive fighting dog for the profit of selfish and despicable cowards.  Rather than selectively breeding to preserve that Guardian temperament, the breed had instead been selectively bred to bring out only aggression over many generations.  Although not as horrible, but just as ignorant, were all the “breeders”, who seeing an easy payday, just began paring any two dogs together with absolutely no thought or regard for physical conformation, temperament or health.  As long as they produced dogs that were, for the most part black and brown, they would call them Rottweilers and sell them for as much as they could; only to turn the poor female around and breed her again as soon as her last litter was sold.  I hold these selfish individuals just as culpable for the destruction of the breed.
I also learned from my research that AKC (American Kennel Club), unlike the ADRK (Allgemeiner Deutscher Rottweiler-Klub), offered their guidelines as “suggestions” and did not strictly enforce them as was done in Germany.  They would still register your dog or litter regardless of whether any health clearances were performed, regardless of whether the parents had received any temperament testing, regardless or whether the dogs even remotely resembled the set breed standard physically.  This placed all of the moral and ethical responsibility on the shoulders of the “breeders”.  A breeder only interested in profit will not waste money on health clearances, decent dog food or good vet care.  Such a breeder will not let physical imperfections, poor character or a dog’s current health problems get in the way of using a fertile male or female.  I gradually became aware that the task of restoring this exceptional breed was bigger than I initially anticipated.  But, as I am not one who is easily dissuaded once my mind is made up, I set off to Europe to learn more and see for myself what a True Rottweiler was. 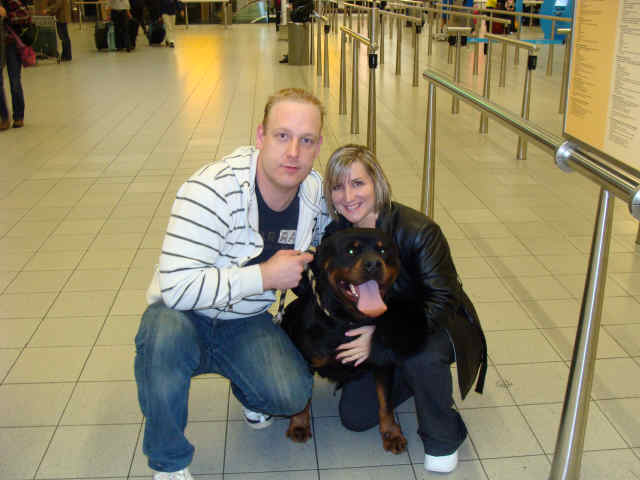 To say I was impressed would be a gross understatement.  Over the next few years we made may more trips to Europe and met some amazing breeders who truly have a passion for these great dogs.  After much more research, I finally began purchasing dogs worthy of becoming Guardian Rottweilers.  I do not sell puppies to “pay for my mortgage or car” as those are already paid for in full.  As a matter of fact, were it not for my Rottweiler obsession, my husband and I would both be retired and living off of interest.  I own and co-own over half a million dollar’s worth of quality Rottweilers, and my monthly expenses for my dogs (food, vet bills, Frontline, monthly heartworm preventative, etc.) is over $4000.  I spend well over $40,000 per year in travel, mostly to Europe, for dog shows and training (me and the dogs 🙂  I hope with each litter to earn enough to “break even” on some of the maintenance, so my husband does not become too cross with me!  But most of my “dog expenses” are paid for by my wonderful, loving, and incredibly patient husband who works two jobs just to support “my habit”.  I don’t breed just for the sake of producing puppies either, there are already enough of those in the world in need of a good, loving home.  My goal is twofold; to better the Rottweiler breed through very careful and selective breeding  producing puppies that are even stronger physically, mentally and genetically than the generation before it and to re-educate the public via my website and by example with my own dogs and those I produce.  If I can give even one family a “Diesel dog” then I will be happy, but if I can give that to many families, then all the poop scooping will be worthwhile! 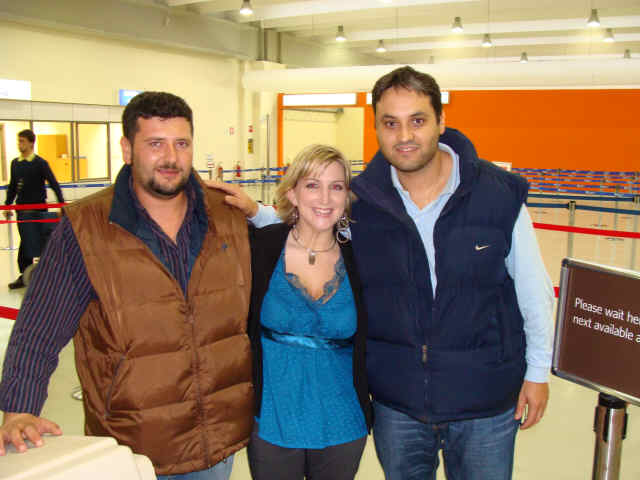