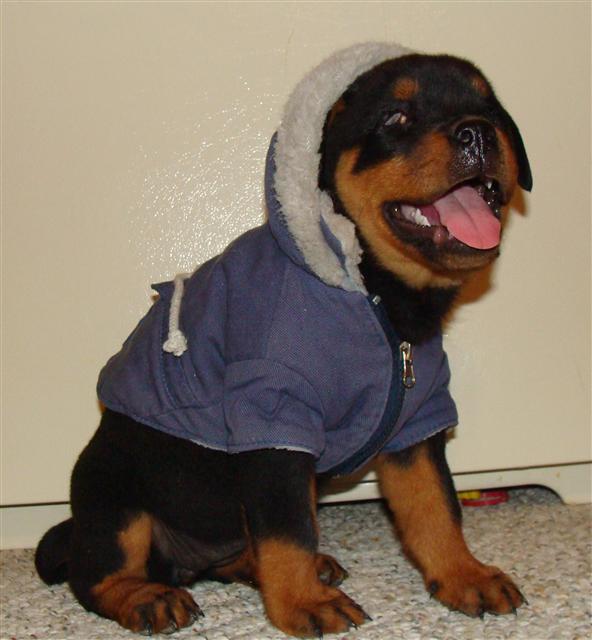 LOVE, LOVE, LOVE this sweet baby girl!!  She is strong and stubborn and 100% rottie!  She is very independent and curious.  Olive is spunky and loves to play. 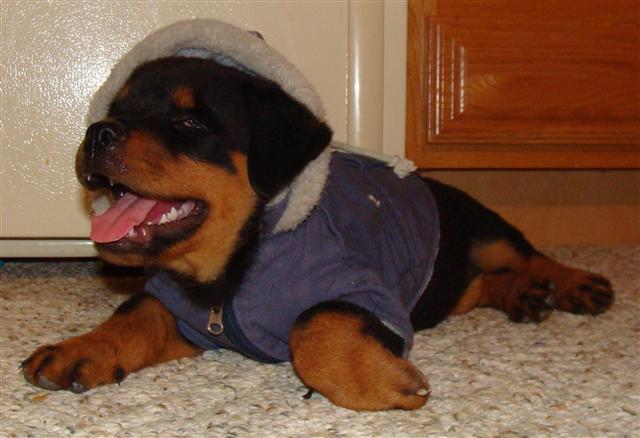 Olive is a very special little girl with a special story.  When she was born, either via the birth canal, somehow immediately after birth, or possibly even during gestation, she developed an infection.  Within hours of her birth, there was significant ocular swelling.  Puppies are born with their eyes sealed shut.  This is because puppies are born underdeveloped.  Ears and eyes are sealed, muscles are underdeveloped, and the puppies are essentially helpless.  The eyes are sealed for the first 2-3 weeks of life so that the eyes may finish developing.  Opening too early will result in blindness from exposure to light.  This put us in a very difficult situation with young Olive.  If we did not open her eyes to relieve pressure, not only could there be permanent damage to the eye globe from the pressure build up, but excess cerebral and sinus pressure was another immediate concern.  We took her to the vet immediately upon encountering the issue, and my wonderful veterinarian got out of bed to meet us at the clinic.  We lamented the decision with great concern.  We opted to at least attempt to resolve the infection with antibiotics first.  She was given a strong antibiotic shot as well as started on oral amoxicillin drops.  She was placed in the incubator and constant watch was give.  We did not have to wait long to make our decision as Olive made it for us.  The pressure caused the corners of her eyes to break the seal.  Even though puss seeped out, there remained significant swelling in her face and head.  I have not seen such determination in a puppy since out sweet Yuki.  I cannot even fathom the tremendous pain she had to be in from the pressure; yet she did not give up!  She continued to root and nurse- determined to survive.  For anyone who is not a breeder, it may be difficult to appreciate the significance of this.  I cannot tell you how many puppies I have had to struggle to keep alive fro “failure to thrive”- where a puppy just does not have the will or desire to live.  This can be caused by something as simple as hypoglycemia, hypothermia, or even an upset tummy.  But for a puppy to be suffering as much as this beautiful, brave little girl and STILL fight back!  It is nothing short of a miracle!!  She NEVER ONCE lost her incredible will. 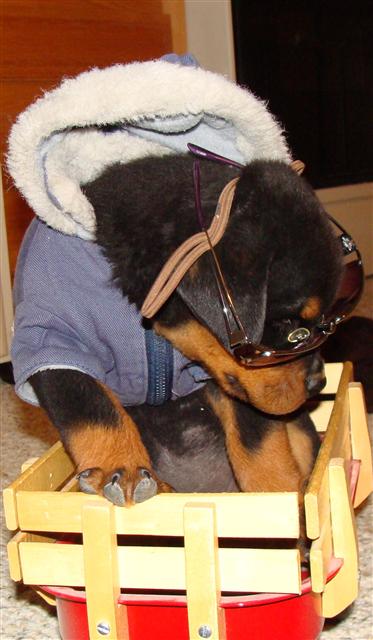 Once we realized that the seal in her eyes was broken, we kept the litter in the dark for 3 weeks.  We used minimal candle light when we needed to weigh or check up on pups.  After the rest of her littermates all had eyes and ears open, we ventured out of the dark with little Olive and made a trip to the vet.  The prognosis for her was excellent- she was strong, healthy and the second heaviest pup in her litter!  The prognosis for her eyesight however, was not as bright.  She would be blind in both eyes.  Her eye globes had either ruptured from pressure or disolved from bacteria.  The cause of infections was still unknown and the culture that had been sent out only revealed significant gram positive and negative bacteria and did not give insight as to mode of infection.  I asked Dr. Jeff what her future was like as a blind puppy, and he said with her spirit, she would have absolutely no problem.  He could not have been more on point!  Miss Olive continued to grow and develop and had such an excellent personality!  She developed an INCREDIBLE sense of smell and hearing and would tilt her head back and fourth to focus her hearing (much like Ray Charles!).  She had an AMAZING memory and would remember the distance and topography and then sprint from place to place at a pace that NO ONE would believe her to be blind!!  And on the occasion that she would collide with an object or person (or sibling!) she would simply re-direct and continue on!  I do not think I have EVER seen such exceptional character in such a young puppy in all my years of breeding.  She has certainly left an impression on everyone that has ever met her.  She would gallop and play fearlessly with the kids and other youth dogs.  She had more confidence than most sighted dogs!  Olive is just such an incredible girl and I could not be more proud to know this special lady! 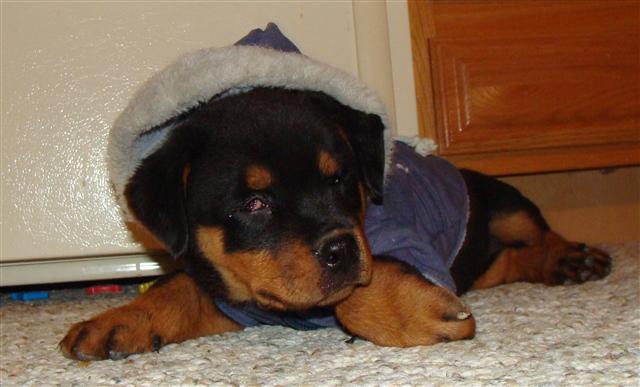 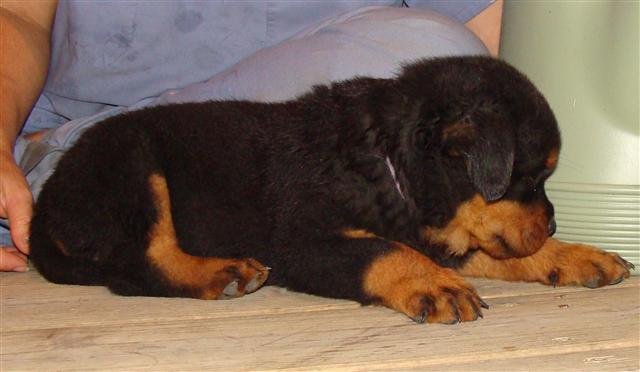 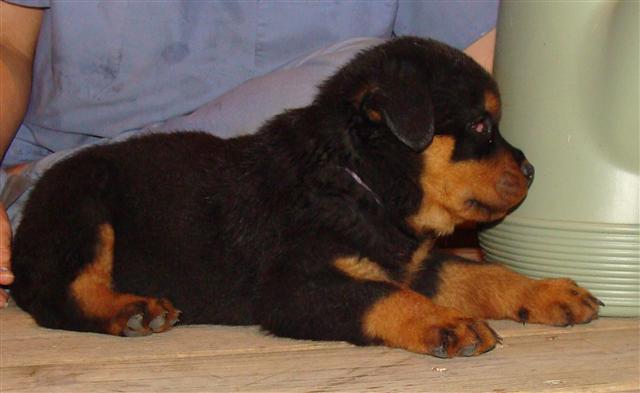 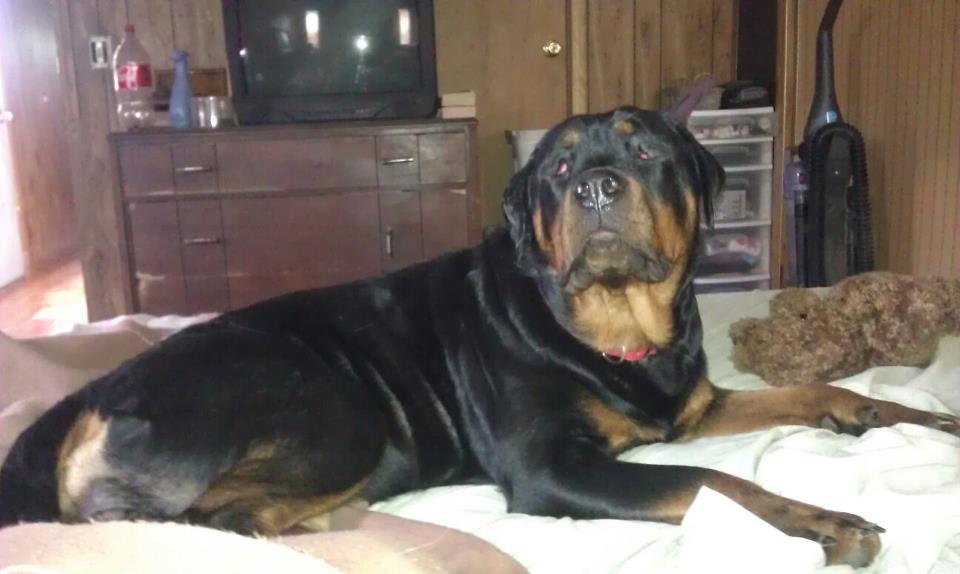