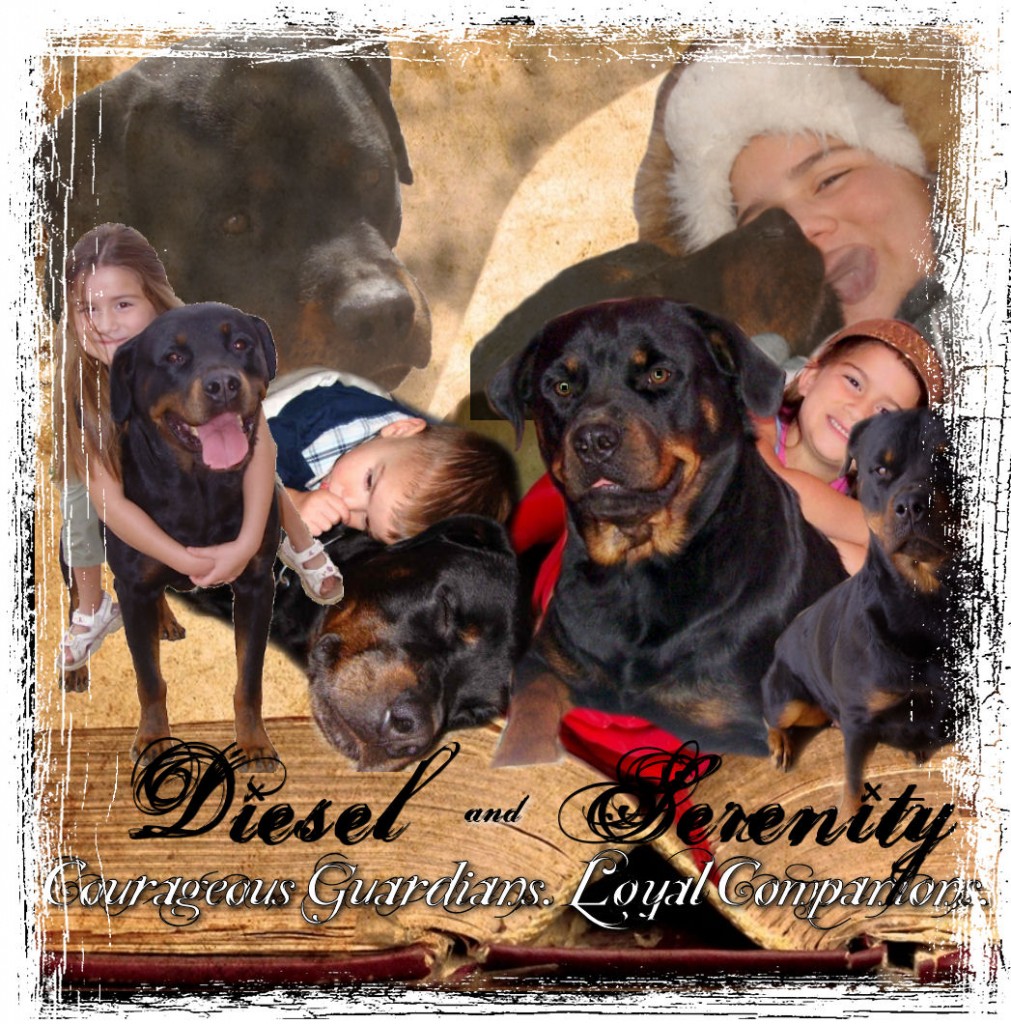 There are really no words for this breeding.  These two dogs are, without a doubt, the most amazing companions I have ever known.  They are both so intelligent, intuitive and selfless.  Diesel and Serenity are just as beautiful inside as they are outside and I could not love them more, and I am certain that it is a mutual feeling.  I feel so honored and humbled to be able to have this so special litter of miracles. 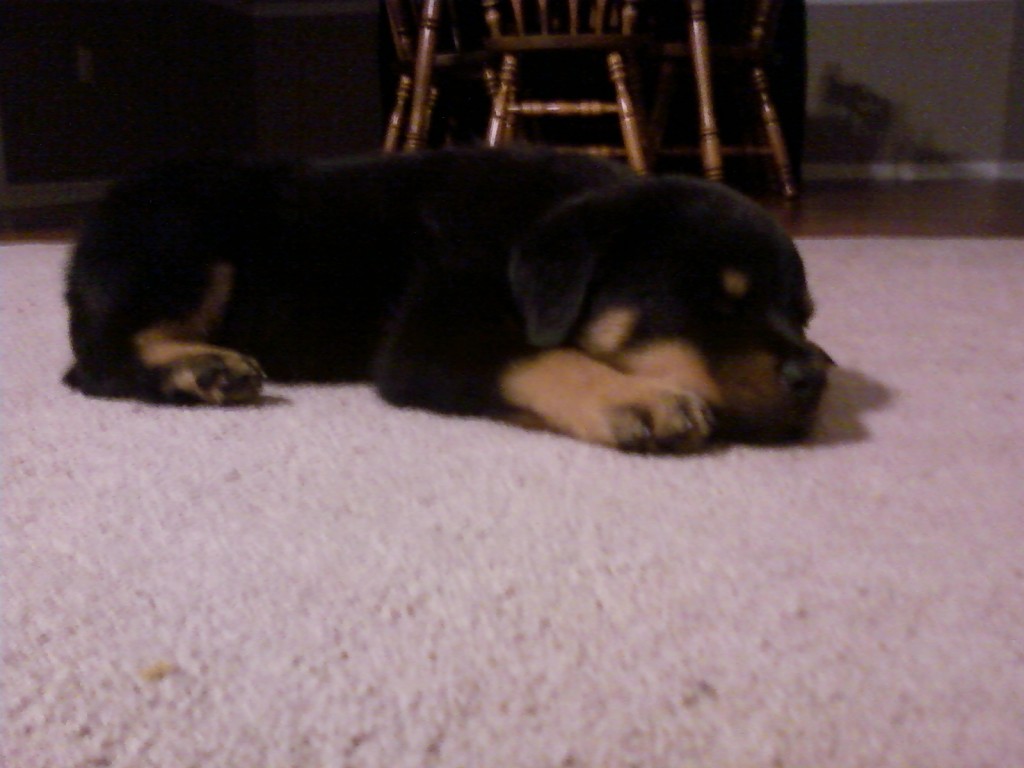 Hi Alice. Just letting you know that chiko is doing great.. He has already adapted very well to his new home. He didn’t like the crate to well last night but he is sleeping in it today by himself without us putting him in it. He fell asleep on my husband Greg last night. He is so cute.. Thanks again for this gift. More updates later..
Sincerely,
Leslie

I hope you and your family had a nice Christmas. Just wanted to send you some pics of chico ( AKA thor) Do you think he is to fat. ? LOL   he is doing pretty good.  We had an appt. with the vet. today, but with the weather I don’t think were going to be able to make it. Hope you have a great day..
Sincerely
Leslie

Just want to let you know how our first night went!  Tyrael (Courage) was very good in 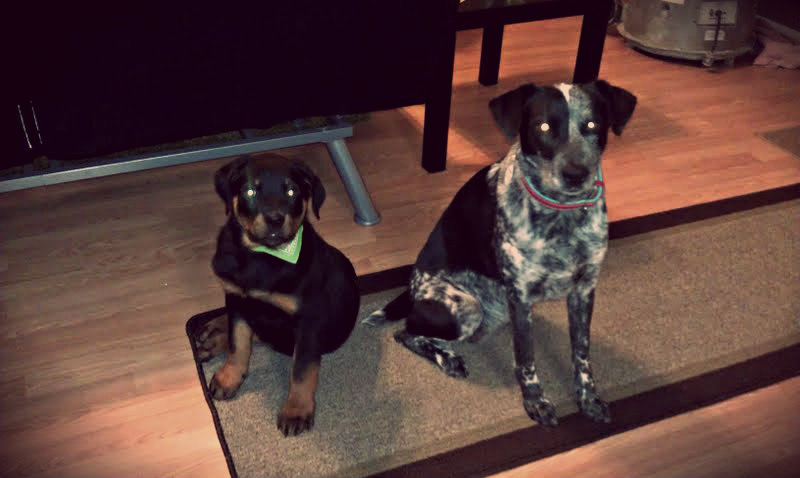 the car.  A little bit of crying when he woke up from his nap and realized we were still driving.  Haha.

Widget is still wondering if he is going to stay or not.  I think she’s hoping he’s only temporary.  😛  He also loves our ferret.  Knew his place RIGHT away, when he pounced at the ferret and the ferret pounced back.  He was like, “Whoa!  Okay.”  He kept his distance after that.

So far only one accident and it was when I caught him in the act and took him straight outside and he finished his business.  He seems to understand already that when I take him outside it means potty time.  He’s also already got the jist of “sit”  SO SMART.

He cried a little in his crate last night, but then settled down.  I woke up at 3AM to let him out and he went potty then back in his crate.  A little more crying, but for a much shorter period of time and then he slept the rest of the night.  No messes in the crate this morning and he had breakfast and did his business outside after.  We’re going to officially begin his basic obedience today, since he’s adjusted so well.

I can’t believe what a great puppy he is!  Tim is just in LOVE with him and, like I had told you before, he is just not that big of an animal person.  We just stand around cooing over him.  LOL  I love that he just follows us around and sits there, watching us in awe.  He’s just FASCINATED by us!  Thank you SO MUCH for letting us have him!  He is just amazing and I already can’t imagine NOT having him.  <3

I will give you many updates!  Be prepared!! 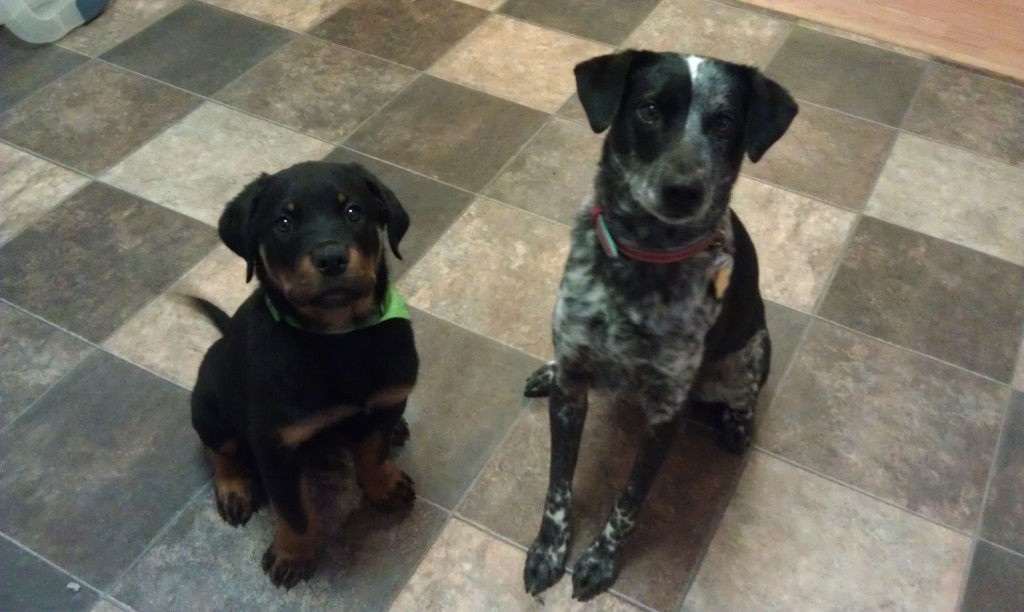 Btw, he is starting to show signs that he takes after his mom.  He doesn’t like it when dogs jump up on humans or play too rough with them.  He chases them around and barks at them.  Haha.  Him and WIdget are getting along great now!  They even share the same bed, even though I bought two so they can have their own.  Although, sometimes she has this look like, “Why do I put up with this?”  Everyone just LOVES him!  You have no idea how many people said they wanted to steal him.  Haha.  It’s also surprising how many people think he’s mixed because he has a tail.  Ugh.  I had one guy at Rural King tell m 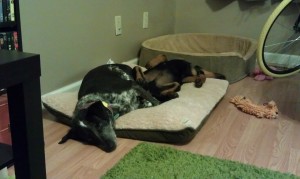 e that you shouldn’t socialize rotties in your home if you want them to protect it.  He said he knows because he raised them for 10 years and his were about 160 lbs or so.  Sheesh.  Nothing like an over-sized rottie that would attack your grandmother if you let her through the door!  I mentioned that you show your rotts and he was like, “She couldn’t show him with a tail anyhow.”  *rolls eyes*  Scary to think he was BREEDING them!

Anyhow, just wanted to give you an update and some new pics of Tyrael and his big sister, Widget.

Here is a great before-during-after pic of Tyreal getting his ears taped!  Thanx Devi! 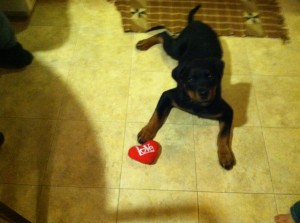 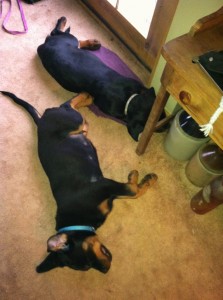 Well he is still doing wonderful! He fits in so well with us! I wanted to tell you we have been calling him Apollo. I hope your not sad about that?? We wanted an “a” name to go with Adara. It took us over a week to decide on a name but Apollo is what we all loved. He is such an amazing dog and so smart too! All he wants to do is please us. He goes everywhere with us. It was funny we went to our church on Wednesday night and my 3 year old was asking why Apollo wasn’t with us.:-) all the kids are use to taking him everywhere. I will continue to send pics of him.:-) Have a great weekend! Love, Danielle 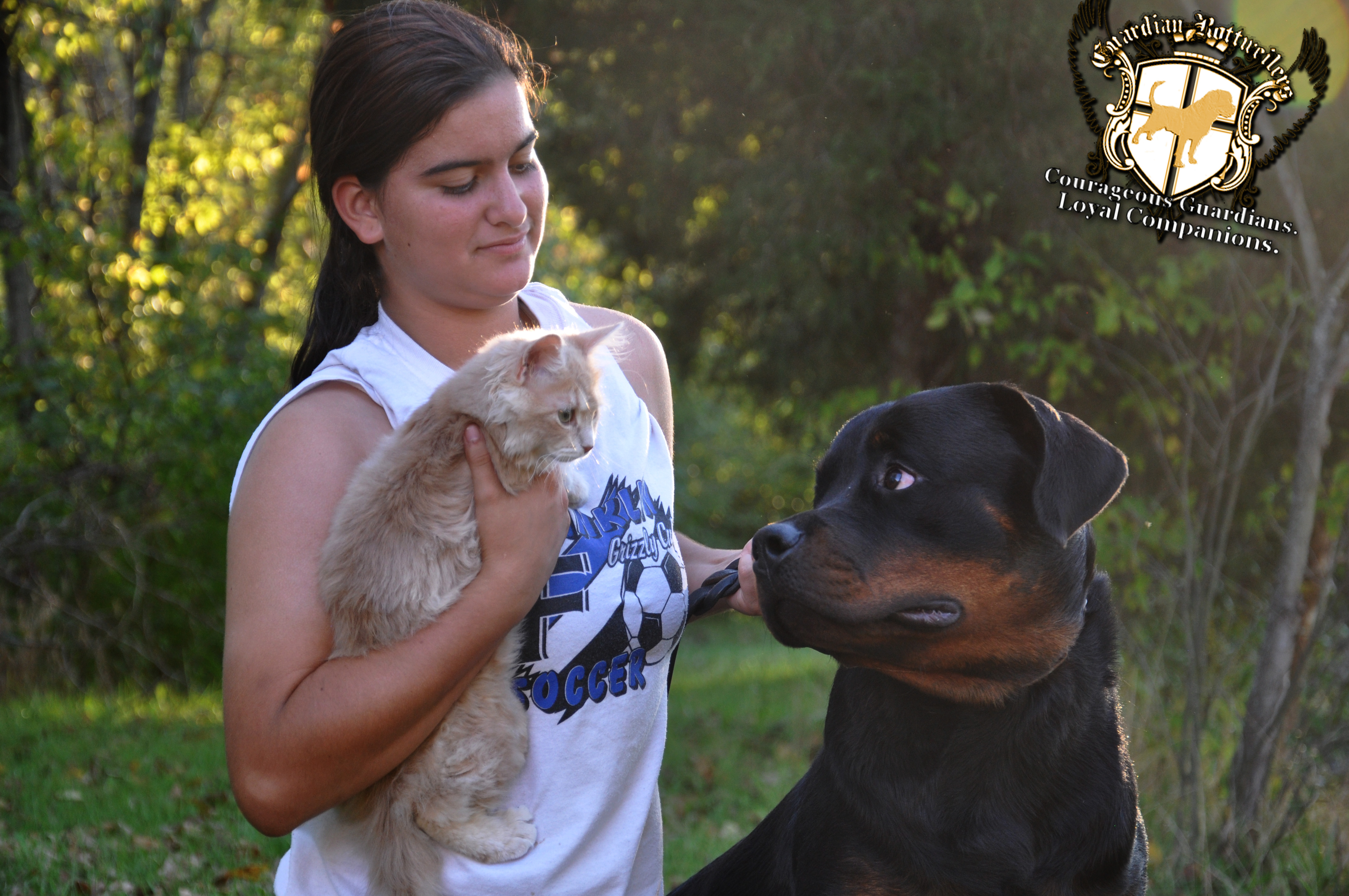