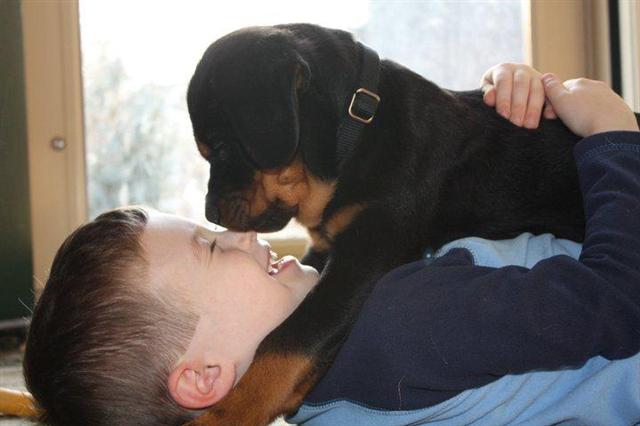 He is doing well, integrating very well!  Meika just adores him & this afternoon they finally hit it off playing together – I think it took a while for him to feel comfortable away from all his buddies.
I will send some photos soon.  He is definitely not lacking in the kisses area that is for sure! 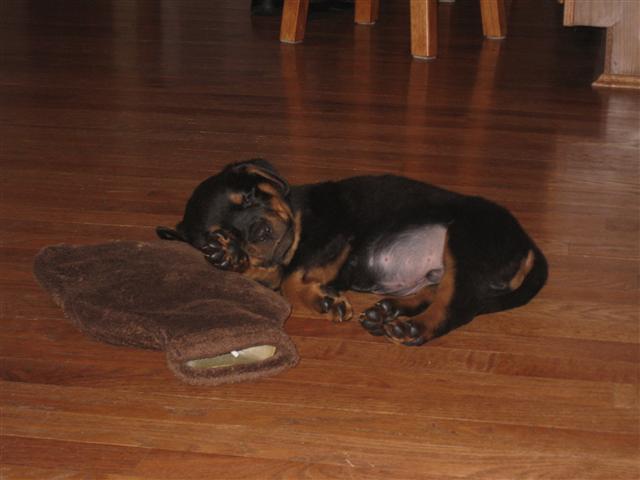 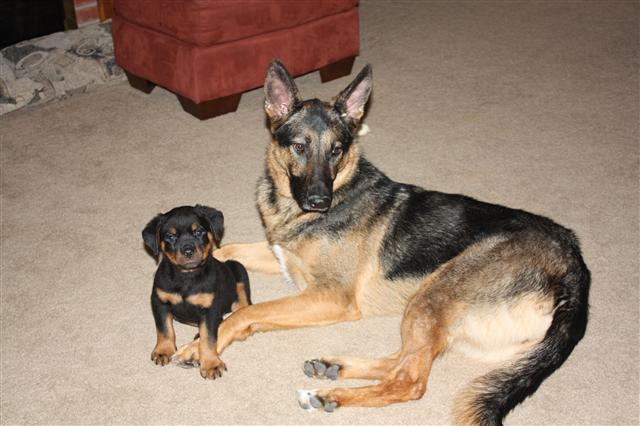 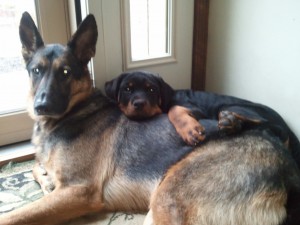 I hope you are all doing well.  It looks like from your FB post that you are enjoying a bunch of new puppies! 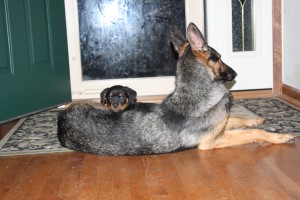 I wanted to check with you to see how the other pups in Mojo’s (Dash) litter are doing – he has been having some issues with his left hip and we have an appointment w/the vet later this week to get him in for some rads.

I’m not sure what exactly is up with it,  but I wanted to have as much info for him as possible when we go in. 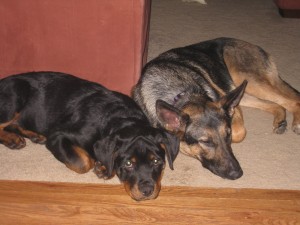 I attached some photos of Mojo w/his ‘girlfriend’ Meika – they just adore each other! 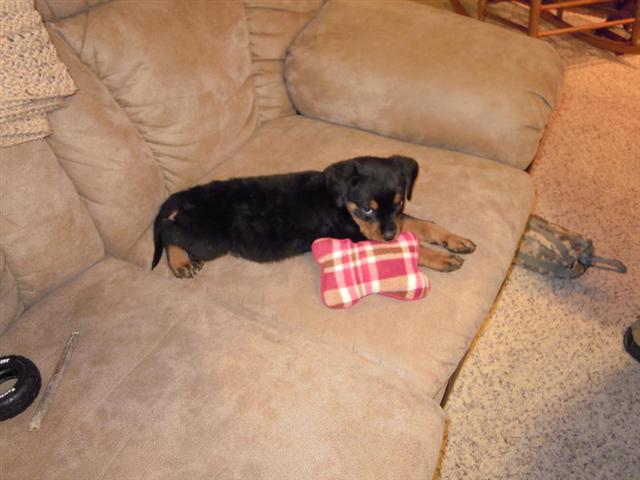 Dante is doing is fine. I will send you a picture in a few minutes from my other email address.

He did fine on the ride down here and has not been stressed with the separation from his litter. He has met many of our friends down here and is already recognizing some of them when they returned.

One question? When do Rottweilers typically start growling and barking? He is funny right now he grunts and wimpers when he plays, sleeps, needs to go outside, etc. but nothing as got his attention enough to bark or growl

He is doing great with housebreaking too. He even whimpered last night about 4:00 am and I took him out and he went and went right back to sleep.

thanks so Much!!
Todd

It is amazing how his intelligence is coming out already. He notices the TV and watches it for 5-10 seconds at a time!

I get a kick out of watching him watch TV!!

Just wanted to let you know that Draco and I made it home safely. He did really well on the plane, whined a little here and there but after a little reminder that I was in fact still there he was okay. He is one very tired pup. After all the traveling he came home, ran around with the boys and my lab, ate, pottied outside, learned that it was not such a wise decision to attack the cat’s swishing tail (lol) and as soon as we put him in his crate, he checked it out for about 10 seconds, laid down and he was OUT.

Thank you for the information. I’m not too concerned about his size, like you said puppy size isn’t always indicitive of adult size. My lab was a huge puppy (at least twice the size of Draco at 8 weeks with enormous paws) and he’s now 14 months and 68 pounds. He actually turned out smaller than he was supposed to be, his dad being 95# and his mom 75#. I think once Draco gets a little more meat and muscle on his back legs he’ll be okay but I’ll definitely keep you posted.

I completely agree with you about their personality, he is AMAZING. He has really bonded quickly with my boys, especially my youngest. The boys were playing this morning pretending to fall and get hurt, and he jumped up and ran over to them frantically checking them out. At first I thought he was trying to play but his tail wasn’t wagging and he had a very serious look on his little face. Once they got up and started laughing his little tail went nuts and he showered them with puppy kisses :o) As I type he is asleep and and has been “swaddled” in a fleece blanket by my oldest. The boys are taking turns with him in their laps….poor little puppy, forced to have constant attention lol.

I hope you guys have a wonderful holiday and that you were/are able to get all your shopping, baking, etc. done. I personally have not wrapped a thing but have done an excellent job consuming my baked goods lol! Please tell Miguel thank you again for meeting me at the airport. 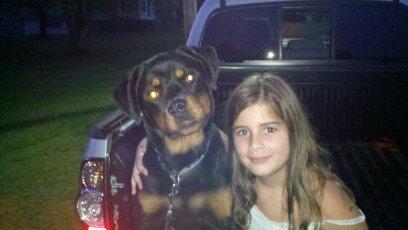 Alice,
Just wanted to give you a quick update on Dutchess.  She is an amazing dog and a real member of the family.  She is unbelievebly smart and was so easy to train.  I never have to leash her because she listens so well. 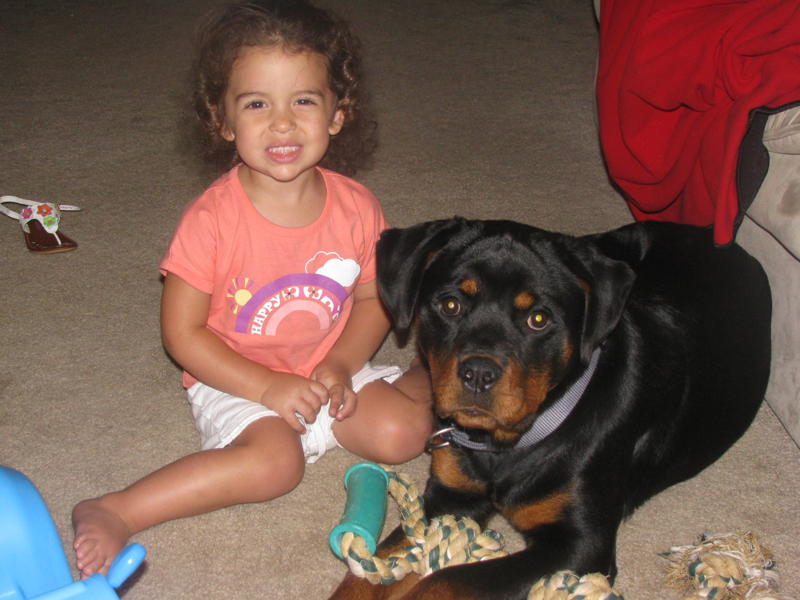 I was concerned for a while that she was too friendly and would not be protective if necessary.  But this summer when I had contractors working on my deck, she was very clear that they were not to go near my youngest daughter.  She put herself between the workers and my daughter and made her presence known.  I wasn’t home and wouldn’t have beleived it if my wife didn’t get it on video.  Other than that incident she has never shown any sign of aggression.  She gets along very well with other animals and most people as long as we’re present.
I will defenitly be contacting you in the future for another puppy.  We’re expecting another child in December and once we survive the infant stage I want to add a male Rotty to the family. 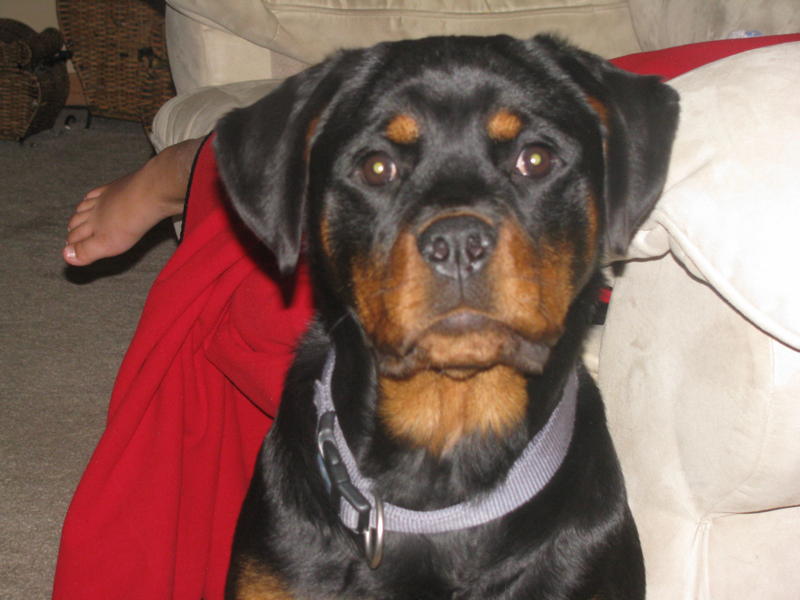 God bless and keep up the amazing breeding,

Alice,
This Steven the military guy at Ft Knox. I bought Dakota which my son renamed Ruby.  Ruby is awesome and we love her.