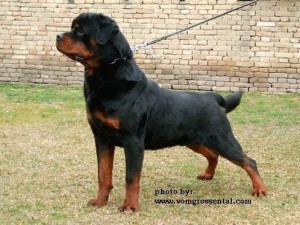 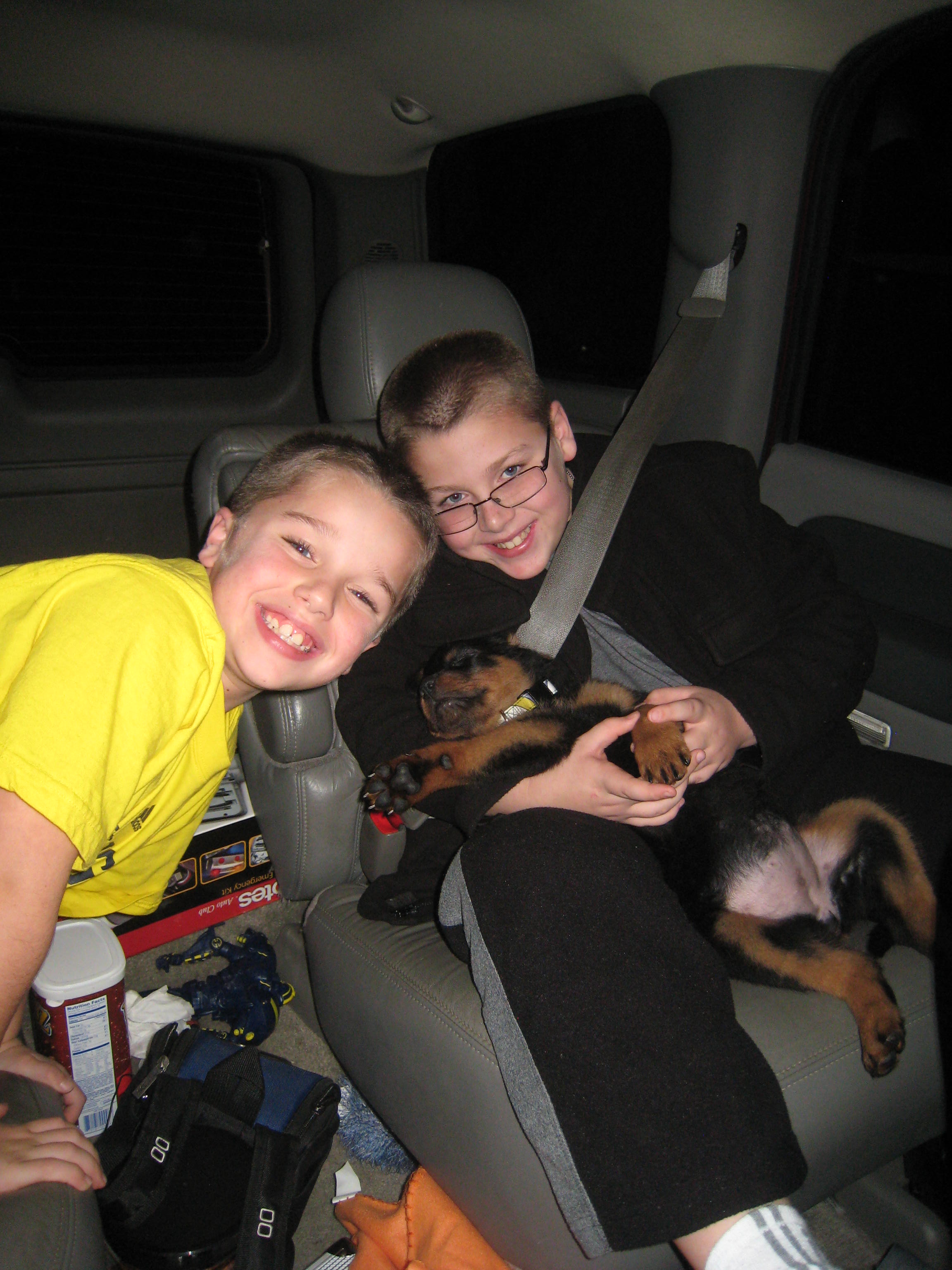 Wanted to let you know we got home and Ruby is doing great.  She wanted to explore the car, but we all took turns holding her.  She finally got tired about 20 minutes from the house and passed out.  The picture I attached will show the result.

She has warmed up to everyone and the kids are already talking love.  She is so comfortable she took on our lab for a wrestling match.  We are telling him gentle and she is nipping his heels.  Paybacks for him, because he was obnoxious to our older dog as a pup.
Good luck on your trip next week and Happy New Year!!
Stacie and Brad
Hi, Alice.  How is everything at Guardian?  Wanted to give you an update on Ki (RUBY).  At her 12 week appointment she weighed in at 20 lbs.  She is not very big, but her head is good size and she looks in proportion.  We are not into overfeeding our dogs, since big dogs have such joint problems.  In fact, our friends make fun of us and ask if we feed our lab.  He is 80 lbs.  Right where he should be.
Anyway back to Ki.  She is doing fabulous.  She is beautiful and we get comments from visitors here at the house all the time.  I have had her at school twice.  Some of the kids were still there and of course they come up to her and it did not phase her at all.  I have not seen her scare away from anything but the vacuum cleaner.  She did not bark though, just walked away.  I have started basic commands with her and she is learning very quickly.  She already does look and sit on verbal command and she is working on down and stay.  She walks well on a leash, because we have her on a leash when she goes outside for right now.
We have found the two things she loves.  Fighting with our lab and SNOW!!!  I am sending a few cute pics of her.  Ki has made a wonderful addition to our family.  Thanks.  Oh ,we were wondering where her brother and sister wound up?  Just wondering.
Thanks and have a great week!!!
Stacie, Brad, Zach, Austin, Max, and Ki 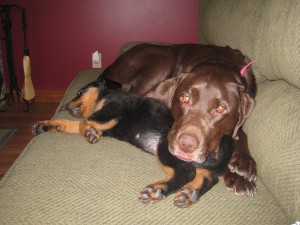 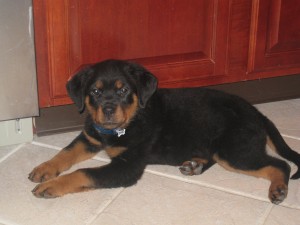 Here are some pics of Ki.  The first ones are her younger and her couch diving and the last ones are current that I just took.
She weighs 44 pounds.  She is currently going through a crazy girl stage.  Lots of treats and clicks to show her how to behave.  I’m exhausted.  As a teacher, people mom, and doggie mom, I feel like I am constantly correcting behavior.  It will be worth it in the end for all of my children.  I hope. 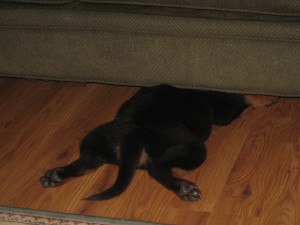 She is doing wonderful and is so beautiful.  Everywhere she goes we get comments on how pretty and of course about that tail.(her fav chew toy)  I think if she did not have her tail, I would not have a couch.
Hope all is well,
Stacie 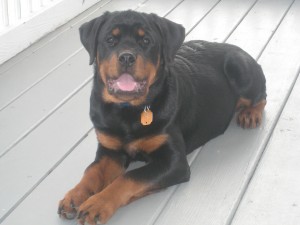 Wanted to give you updates on Ki.  She is such a wonderful puppy.  She is so calm and easy going.  At her 16 week appt. she weighed 33 lbs.  Vet said she was looking good.  She is still battling belly issues though.  She gets her last dose of meds this week.  She will be in pup classes soon.  Waiting for the next one to start.I have a question for you about showmanship leashes.  My oldest is doing 4h with our lab and I wanted your advice on what type would be best for a big dog.  Most the people in our group have dogs smaller than Ki so I don’t think they have the knowledge of big dogs.  What would you recommend that he use?  Also a training question for Ki, down has seemed to take awhile to learn.  She can do with dragging bait, but not without.  Any tips?Once again thank you for Ki.  She is becoming such a good model for the breed as a family pet.  People comment on how good she is and she is absolutely stunning to look at.  Her coat is shiny black and her head is much like her mother. 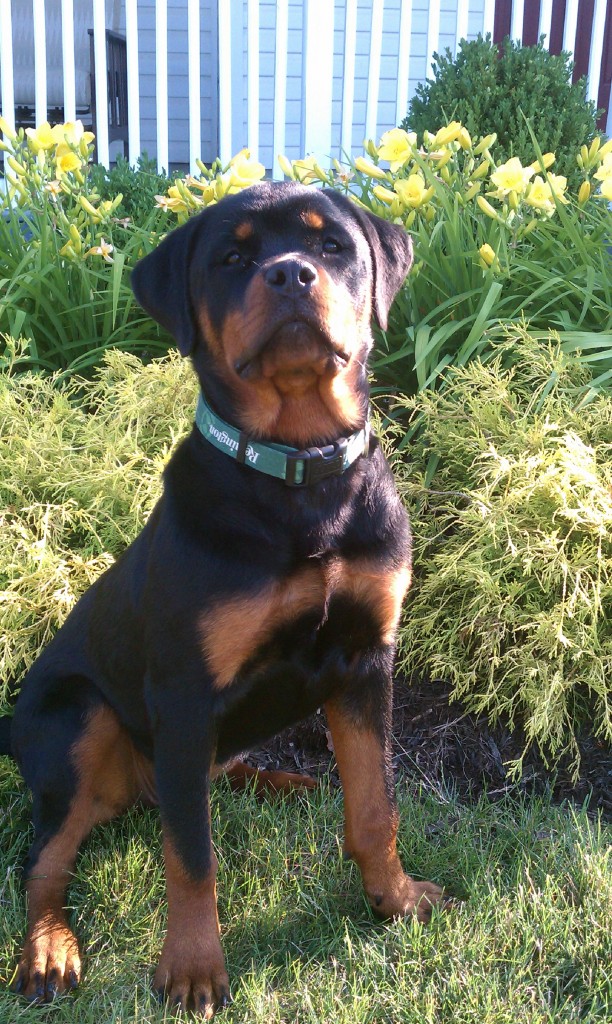 Have a great day and best wishes to all at Guardian.Hello, Alice!  Well Ki is growing into quite the dog.  She wears me out though.  She is very gentle with all of the kids that come around the house and has been known to give spit bath facials.  A big adjustment for us is the use of her voice.  Our other dogs never talked.  She is staying lean but man is she powerful.  I do have a question about the barking.  We don’t leave our dogs out so she is not barking constantly, but is very selective.  Do you have some training tips to help us for when she does sound off?  She sounds off when we sit on the porch and people walk down the road and sometimes she is hesitant with men and will bark at them.  Now mind you, she does not do that at all men.  I have noticed people that are nervous with her especially men is who she barks at.Ki is beautiful and strong.  She is definitely hard-headed but very smart, but so isn’t my son.  My husband said that you should have advertised that your pups are champion wrestlers because Ki can get it on much to the dismay of my lab.Hope all the pups and adults are doing well.Love,
The Tillmans
(PLEASE SEE THE Q & A PAGE FOR MY TIPS TO KI’s BARKING) 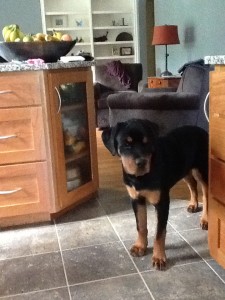 Hey Alice,
This is Laura, I adopted Rajah from you, we call him Gus ( his full name is Augustus)though! He is doing really well he’ll be 21 weeks on Friday! He weighed 11.9 lbs at 13 weeks the vet was concerned about his weight for age, but I remembered you telling me his brothers and sister were more aggressive with eating them him! He didn’t stay little for long at all though! His next vet visit he had doubled his weight to 25 lbs at 15 weeks, and at 18 he was 36lbs and he is currently 42 lbs. He goes for weigh ins every 2 weeks to make sure he’s not growing too fast for his hips ( i really think he’s just catching up to his brothers and sisters!). I do have a couple of questions for you though. Gus get’s hot very easily which I read is common for rott’s and he does have a very think coat he has longer hair than some rotts! ( he even has little wavey curls down his back!)But I get worried about over exhausting him he seems to get tired very easily ( but he’s a puppy so I assume that’s normal? especially with all the growing?) He’s very smart and did well in his puppy training class, he’s been a sitter ever since I got him the trainer used him as an example a lot because of this. He would “sit to greet” on his own! They also said he is one of the calmest puppy and rottie they have ever met. I really think Gus is the best dog ever and the cutest, I would say I was bias but when anyone meets him they fawn over him and say he’s pretty much the prettiest puppy they have ever seen!( I should stop bragging, but I know you understand!)Anyways I just wanted to thank you for allowing me to adopt Gus, he is an amazing boy! Also I just wanted to make if there was anything I need to be concerned about with him being so calm oh and very gassy ( he seems to have anal gland issue is this normal at this age?) The vet said he his perfectly healthy I just thought you would be good to ask with all your experience. Sorry for writing such a long email, I’d love to know how his brothers and sisters are doing if you know! I’m going to try and attach a few pictures but I’m not the best with computers! Again thank you so much.
Best,
Laura 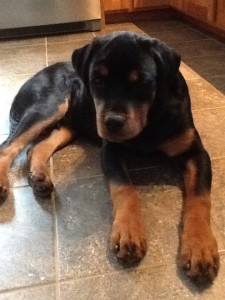