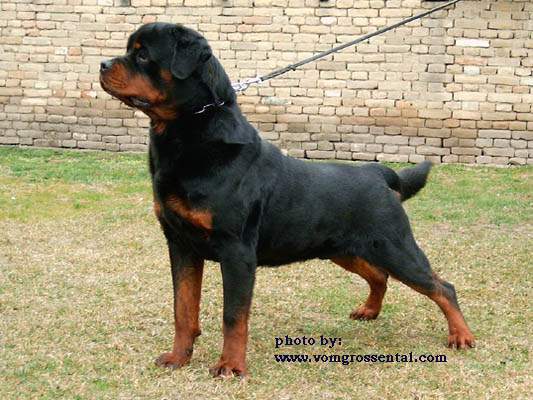 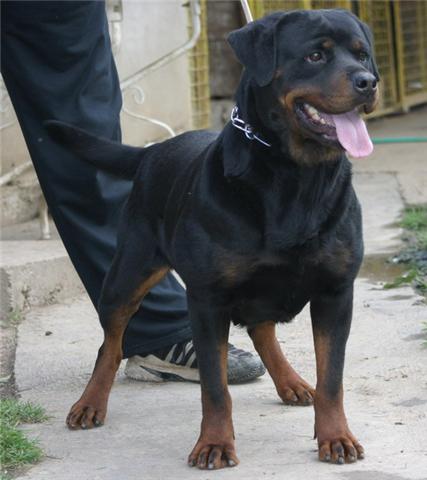 It was nice meeting and spending  time with Miguel today.  He shared stories of his beautiful family. You are so very lucky to have such a wonderful husband.

Nakos has had a very busy day.  He’s met a lot of people who think he’s absolutely “gorgeous.”  My daughter’s dog, Harley, is delighted with his new friend.  They played in the back yard this afternoon and has run around the house with him.  Nakos is finally slipping in a nap.   My daughter is taking him to vet tomorrow when she gets off work.  I will send pics in a couple days.

I am very pleased with Nakos, as is my family.  You’re the greatest.

Nakos sends his love to all!

Nakos is growing and busy as can be.  He went for his shots yesterday and weighs 34.8 lbs.  Here’s a photo taken today – not a good one but it’s so hard to keep him still.  Miguel can relate to Nakos not liking his 1st bath when he arrived.  Well, all of that has changed – every time I wash my face or take a shower, Nakos gets in our bath tub, turns on the cold water and goes absolutely crazy.  He gets wet minimum of 3 x’s a day.  He loves the pool, as well.  I was not thrilled at him getting in the pool but he jumps on the 1st step and drinks water.  Last week, my husband let him out to run and in comes back up to the pool, jumps on the 1st step and before he could get out the door, he leaps straight into the middle of the pool, under the water (Brad thought he was going to drown), pops up and starts dog paddling away.  He thoroughly enjoyed his swim – not the least bit scared.  LOL—come next summer I won’t be able to keep him out.  We will cover the pool in a couple of weeks so he will not be happy.

More great news – my daughter and husband have been picked by a birth mom as adoptive parents.  It’s a baby girl and due 1st week in Feb.  We are praying hard that she does not change her mind.  She’s very young, made a mistake and wants to make something of her life now.  They have not found a house and still living with us (which is perfectly fine with us) so we can expect a full house before long.  Christy and I are very close and tear up every time we start talking about the baby.

Hope all is well at GR. 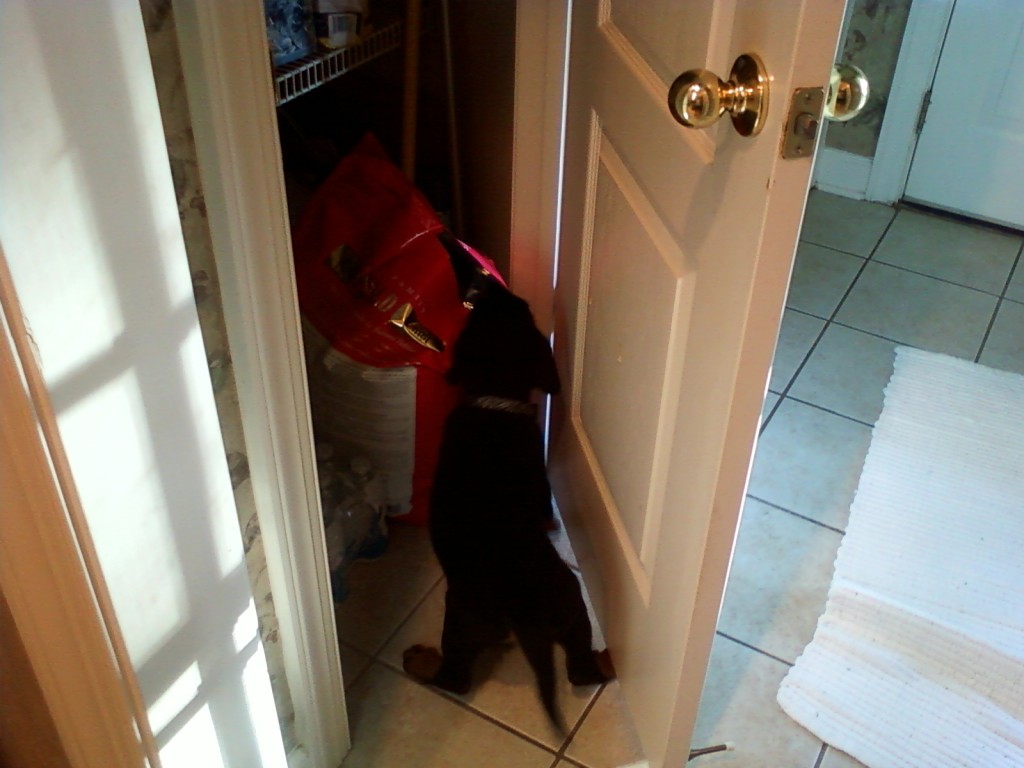 You’ll have to tell Miguel that Nakos has mastered going out without running directly for the pool.  I’ve had to take him out on a lesh up until yesterday as he runs straight for the pool.  I’m sure he’ll be taking a dip just any time but he’s doing pretty good on housebreaking.  At least he knows what to do when we take him out.

I had to send you this pic.  I walked in from work Thu and after he greeted me, he went straight for the pantry of food and starting gobbling away.

Have a great weekend. 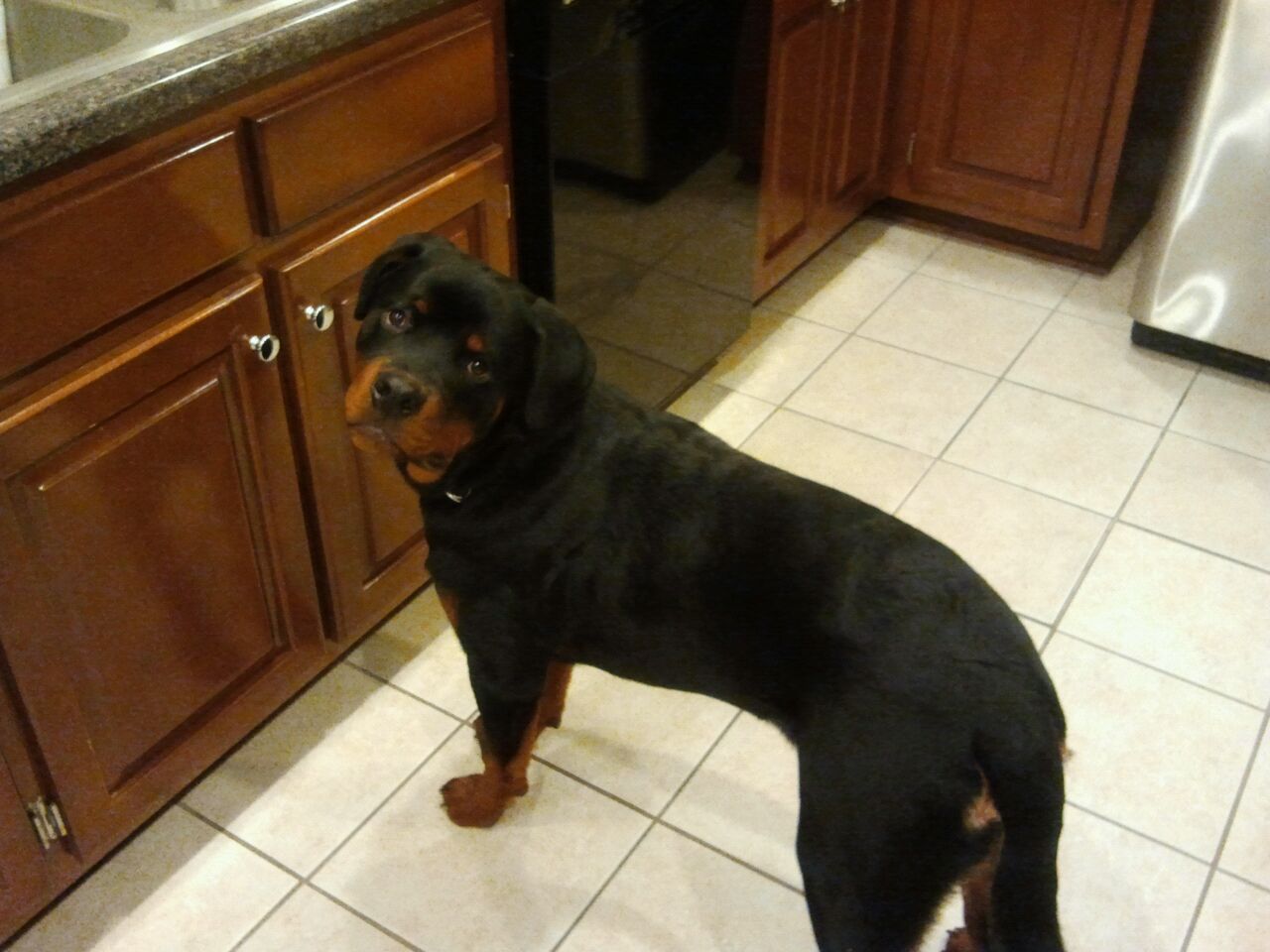 Thought I’d send you a pix of Nakos.  This was taken tonight.  I’m not sure of his weight but think he’s somewhere around 75-80 lbs.  He was so small for so long and in the last two months has definitely caught up.  He still loves to kiss and snuggle.  He loves his belly, feet and chest rubbed before going to bed every night.  Very energetic and loves to run.  We caged him at night until around Thanksgiving and he refused to go back in his cage.  So, I bought a bed and placed on floor at foot of bed.  He jumped right in and has done great.  He has a larger cage in the kitchen and knows when I leave he has to get in it—doesn’t like it but gets in.  He and my daughter’s dog play all the time.  I don’t know what we’ll do if they ever leave.

Hope all is well. 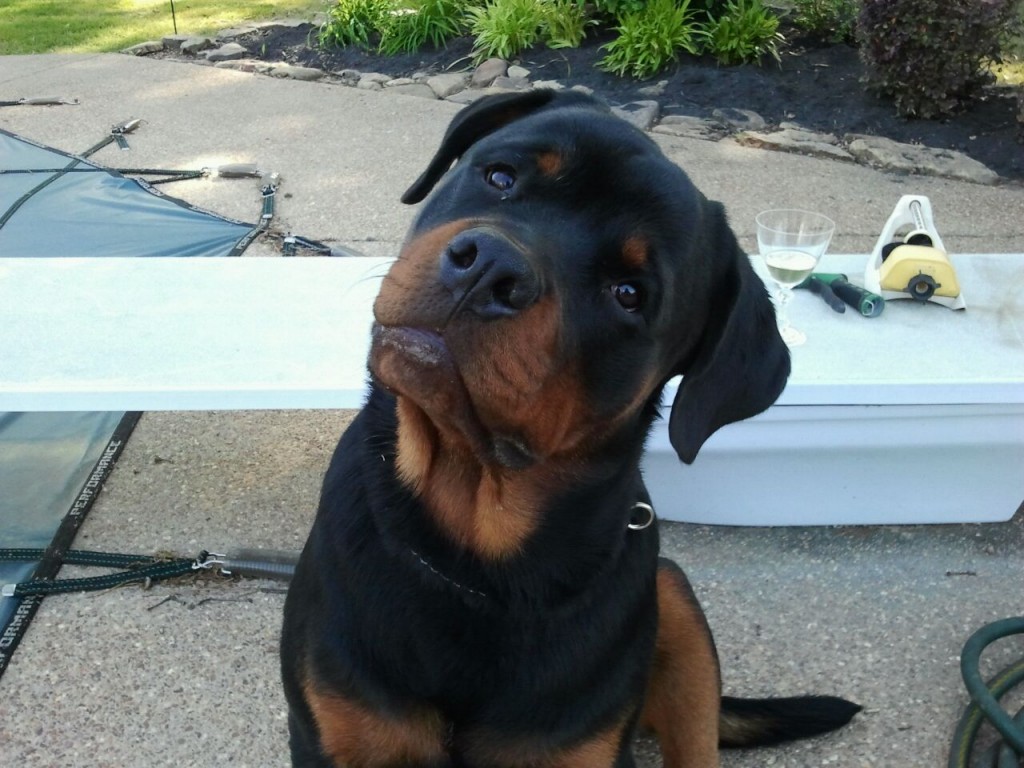 Had computer problems and could not get pics downloaded.  These were taken back in April.  Nakos loves water — thinking he might be 3/4 duck.  He gets in my bathtub every morning and has since we’ve had him, turns on cold water, and splashes.  He does know the diff in hot and cold.  He has been getting on 1st and 2nd steps to pool and not afraid of water at all.  I’ve not let him in the pool yet.  But, this last Sun was diff, he fell in two times.  I was washing pool cartridge 1st time and he walked behind me in shallow end by steps and 2nd time I had baby and told him to down — he went down all right — into the deep end.  I had baby in one hand, collar of Nakos in other.  My daughter running as fast as she could to help.  He doesn’t get as close to pool now.  This weekend, we are going to train him to go to steps 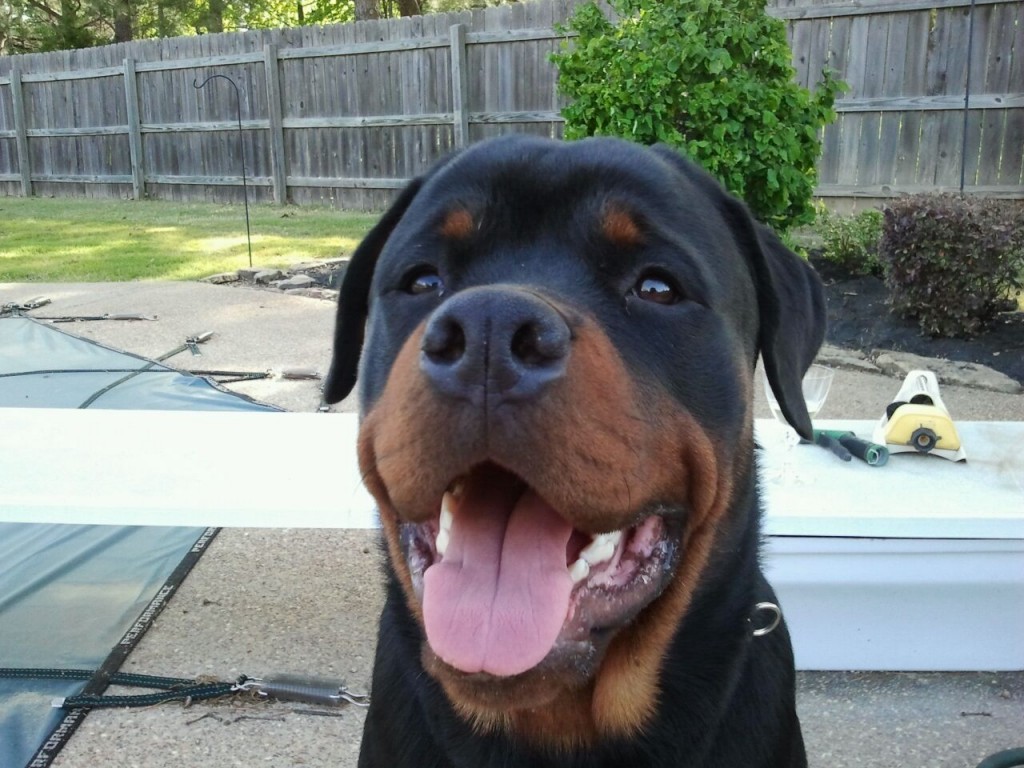 whenever he falls in pool.  Last fall before we closed pool, Brad was cleaning pool one afternoon and Nakos kept running around, Brad was at deep end and Nakos standing at steps — next thing he saw was Nakos flying through air diving into middle of pool.  Brad just knew he was gone.  He was trying to get down to shallow end where steps are and Nakos popped up and started swimming away. I’ll try to get pics of him swimming this weekend and send them.  He loves Miss Collyn (our grandbaby) and everybody else that comes to the house.  He has made so many friends.  I cannot get the other pic to attach so I will send separately.
Hope all is well.

So, it’s been a while since you’ve seen my buddy, but I thought you might want to see how much fun he’s having and how well he’s getting along here in Oregon now.

When I got him, my girls and I named him Roscoe (mostly me after the Sheriff from the Duke’s of Hazard – so he could watch out for my girls!!).  We lived in Charles City, Iowa at the time.  Within the year, we moved to Oregon and live within a very short distance drive from the mountains and within an hour and a half of the beach.  Roscoe loves it all!
I’ve even put together a little website just for his movies and pictures, I thought you might appreciate seeing him now that he just had his 4 year birthday.
ItsAllAboutRoscoe.com
He’s getting along great and we get compliments on him where ever we go…  thanks again.
Bob, Kerry, & Laura Werch
Grants Pass, Oregon
(Visited 4 times, 1 visits today)