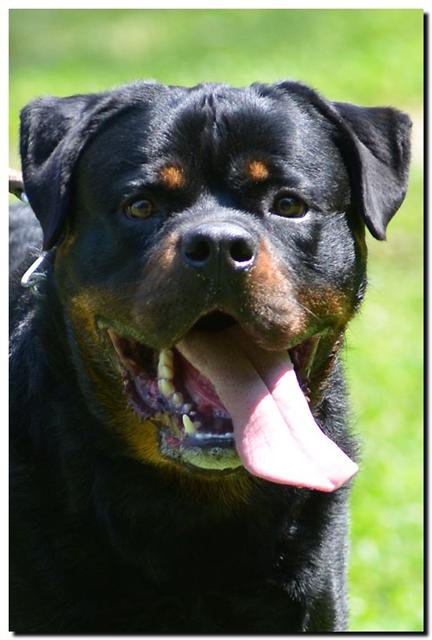 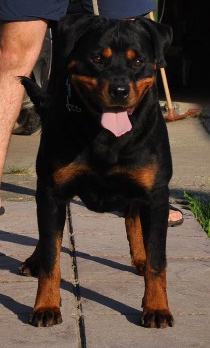 Hey Alice – The boys have arrived safely!!! – He is sooo handsome!!! what a love bunny.  Heidi is trying her best to get him to play tug of war – he really tries hard, but she just drags him around (I know that will change soon:)).  We’ve pooped and peed out in the yard.  Not really interested in his food would prefer Heidi’s – not a good idea:).  and Tica’s.  oh well they’ll have to work it out.  The boys have been raving about your pack – especially Diesel and Crom.  I’m bringing him tomorrow for a look over – I’ll let you know how he does.  I have the paper work, but don’t see the AKC registration.  I can’t remember, does that come to us in the mail?  I really want him fully registered, I’m not sure what his future will be right now.  Thanks again for you patience and hospitality to my boys.  We’ll send pictures soon!!!! – Get some rest:) – Susan

Hey Alice – hope you had a wonderful holiday with all your kids!!! – Ours was fantastic – I’ll forward pics when my sister-in-law sends them to me:).  I have to say, what a trooper Odin is!  We had 10 dogs, 20 people and 2 kids under 5,  Odin just took it all in style, played with the big dogs, played with the little dogs, and was sooper with the kids!!!! – Can’t beat that for nothing,  Oh, by the way, what a beautiful litter the R litter is – Congrats!!!! I’m sure your waitlist is clamoring for that combo.  I tried to hint to David, but he’s said no way,   perfectly content with our big boy:)  – I’ll send pictures later – Feliz Navidad!!!! – Susan

Hi Alice , This is David King not Binky written you ! I want you to know just how happy I am with our new puppy !!! He is the bomb . I have to admit house training was a quick challenge . He is beyond it now . What a great dog he is destined to be . Thanks , your a great breeder ! David C king

Hi Alice – hope all is well with your family – just a quick catch up Odin is doing super – he has started puppy play group and is the most balanced guy I know.  he even has a rottie in his group who has a tail also!!! he is from a breeder in CT.  Unfortunately, that breeder has seemed to have forgotten the standards for the Rottie! – The sire is over 145 pounds – a very big boned puppy for 13 weeks and a little cow hocked.  he is a good boy though and it’s nice to have a rottie instead of all the crazy labs:)  Look forward to hearing from you – best to all – Susan

Hey Alice, just a quick note – Odin is just amazing he is the love of my life:).  I now take him riding with my horse, he goes out for 2 plus hours at a time, he absolutely loves the barn and the ride!!! Today he was on the  wrong side of a stone wall, not a problem, he just jumped the 7 foot fence and caught up with us in the field.!!!  Thank you so much for such an amazing boy.  I have to tell you, he comes to work with me almost every day. I had a woman get really upset that we had a Rotty in out front lobby – she asked “aren’t you scared that he’s going to attack someone?”  I immediately ran at him tackled him rolled him over  grabbed feet, tongue, whatever he was smiling the whole time:)  I said  – him he wouldn’t hurt a flea. – she said WOW!!! I certainly have changed my opinion on these dogs:)  JEEESE!!! people are sooo silly.  You should consider this line again – It’s a keeper!!! = just wanted to give you a brief love update.  All my best to the family – Susan 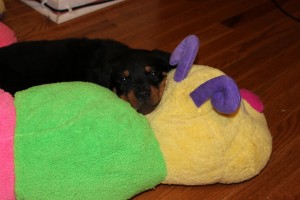 We received the papers and I have to tell you we couldn’t be happier with Ike (Piers). He’s been a wonderful addition to the family and seems to be growing rapidly just as you explained. You’ve definitely got me convinced that having anything cut of a dog is wrong and unnatural, and have also decided not to neuter Ike (Eisenhower). He’s getting along great with our doberman (Rommel), they’ve become fast 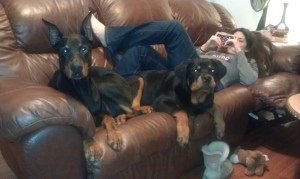 friends. I do have a couple quick questions for you though. He’s now around 105 lbs at almost 8 1/2 months and it seems when he’s laying down for a while and then gets up quickly he limps for a little while. I’m assuming this is simply due to puppy muscles adjusting to the weight he’s carrying now but was hoping you could let me know if this is something we 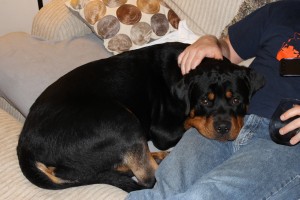 should be concerned with. In addition, because we have decided not to have him neutered do I need to find somewhere he can stud on occasion to keep him comfortable? I’m not looking to charge anything for him to do so, more to just give him some relief if you think its necessary. He’s definitely got his

mothers coloring with what seems will be his father size and is turning out be an absolutely gorgeous dog. His temperament is phenomenal and contrasts well with the rather hyper doberman. We actually just had our first baby Emersyn, our daughter, on Monday and he already is placing himself near her as much as possible. I want to thank you again for being so informative when I came to see you and will certainly recommend you to anybody I know who desires a rottie.
Take care,
Rob